You are here: Home / ifelicious music / Snoop Dogg teams up with wheelchair rap group to inspire young people to stay in school 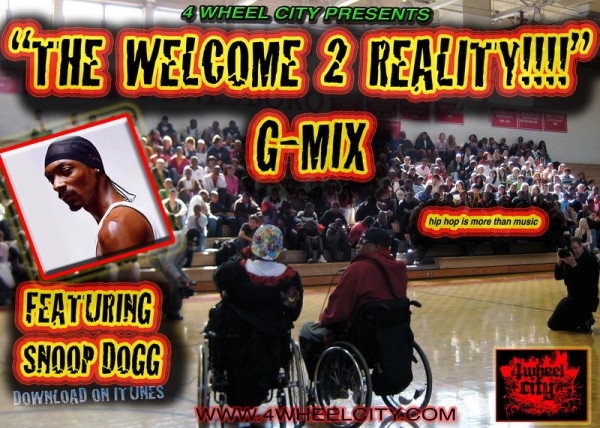 Hip Hop icon, Snoop Dogg, is using his considerable influence and voice to reach out to today’s youth. The Doggfather has tossed his player hat in the ring with noted rappers and disability activists, 4 Wheel City, to drop a strong, message-laden song aimed at keeping kids off of the street and into the classroom. “This is not just a record it’s a movement. It’s a feeling! I’m down with the movement, we are about doing something righteous.” ~ Snoop Dogg

New York, NY (PRWEB) May 10, 2010 — Rap legend, Snoop Dogg has endorsed 4 Wheel City’s, “Welcome to Reality” tour, a unique brand of musical therapy that awakens young people to the realities of the street life and its subsequent consequences. 4 Wheel City founders, Namel “Tapwaterz” Norris and Ricardo “Ricfire” Velasquez, use music as an outlet to educate their communities. Performing at high schools, colleges and hospitals all over the United States, the duo entertain and inspire their fans with Hip Hop, compelling kids to stay in school and raising awareness of people with disabilities. “We are excited to team up with Snoop Dogg,” says Tapwaterz, “He is the perfect artist for this project. Kids love Snoop and he has the street credibility they will listen to.” http://www.reverbnation.com/store/store_for_song/3966008

The “Welcome to Reality G-mix” features Snoop’s laid back flow with Tapwaterz, in your face, East Coast lyricism over a horn heavy, rugged, West Coast beat. 4 Wheel City will debut the song on May 15 at the Canadian Association for Musical Therapy, where the group is scheduled to be the keynote speaker/performer. The song is available for download at ReverbNation and proceeds will be used to produce a public service announcement/music video to present to teens all over the world.  http://www.reverbnation.com/store/store_for_song/3966008

Namel Norris and Ricardo Velasquez are from the same housing project in the Bronx, Ny, yet had never met until fate provided them with a common tragedy. Both men are in wheelchairs, with Spinal Cord Injuries (SCI), owed to gunshots. As their friendship grew, the two discovered that music was an even stronger bond between them.

4 WHEEL CITY is more than an organization or corporation. It is a movement toward healing the hearts and minds of today’s youth. Our vision is one of a world where underprivileged and neglected communities can be free of the constant threat of violence and truly thrive under the banner of hope and inspiration that we provide. 4WheelCity represent all those who have been challenged by setbacks in life, yet possess the will to overcome. 4WheelCity is the energy of faith and achievement.

Canadian Association for Musical Therapy was founded by musical therapist Norma Sharpe in 1977The . CAMT is a national body promoting music therapy and supporting, advocating and accrediting music therapists in North America.
Statement on behalf of the CAMT 2010 Conference Committee:

On behalf of the 2010 conference committee, I am pleased to welcome 4 Wheel City to the 36th National Conference of the Canadian Association for Music Therapy (CAMT). In order to bring 4 Wheel City to Halifax, we have been partnering with a number of private individuals, local organizations and government departments so that the group’s message can reach as many local youth as possible. Through 5 additional performances in the greater Halifax area, 4 Wheel City will be reaching a wide audience, using music as a creative medium to broadcast their positive and inspiring message. We hope that their performances will help to open hearts and minds to the power of using creative expression to overcome challenges and transform lives.

Thank you to 4 Wheel City for agreeing to come to Halifax to deliver your anti-crime message to high school students and community members in May 2010.