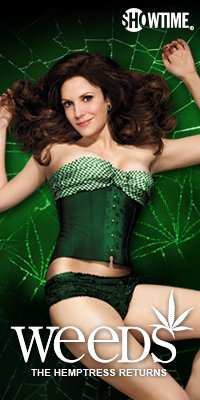 Here’s the latest on the Showtime series, “Weeds.”  The most shocking news is the recent announcement that Elizabeth Perkins who plays “Celia Hodes” will not be returning for upcoming season 6.  For now, her plans involve developing her own comedy series and also playing the role of a mother on an animated/live character film “I Hop” which “Revolves around an out-of-work slacker who runs over the Easter Bunny while driving home late. Since the bunny can’t hop with a broken leg, the slacker is pressed into duty to save Easter. The film becomes a two-hander between the iconic holiday critter and the slacker, each of whom is running from adulthood.” (source: RopeOfSilicon.com)  I wonder how they’ll write Celia out of the script.  I love the show, but it has gotten so bizarre since its early beginnings.

Also, the TV Guide Network has purchased exclusive rights to “Weeds” and will begin airing seasons 1 through 5 on their channel beginning in September 2010.  Also coming to the network, is “Ugly Betty.”  I always slap myself when I catch myself watching shows on the TV Guide channel in that little window above the running list of scheduled programming, but soon there will be no shame in my game!  😉

I’m still missing Conrad who disappeared off “Weeds” along with the rest of his family in season 4.  I found the love tension with Nancy more interesting than her marriage and baby making with Estaban.  Even the chemistry with Guillermo is better.  We shall see how season 6 unravels later this summer!