First of all, I didn’t realize that Nhojj was Guyanese, so big up to him from this Guyanese gal!  😀  ~Ifelicious 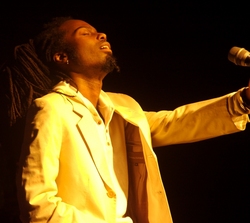 Nhojj to open Circle City IN Pride Festival 2010 singing the National Anthem, a song that honors those who fight for freedom, and embodies the American spirit.

(Billboard Publicity Wire) April 29, 2010 — Unlikely but true, the neo-soul music artist from Guyana with the strange name of Nhojj will be headlining at Gay Pride festivities from New York to Colorado this June. His six-city American GAY Pride Tour will climax with his a cappella rendition of the National Anthem in Indianapolis, IN on June 12.

After hearing Nhojj’s work, Michael Manning, Entertainment Co-Chair of Circle City IN Pride Festival 2010 invited Nhojj to open their gala celebration with the Star Spangle Banner. Nhojj immediately accepted. “The National Anthem is perfect for Gay Prides, because it celebrates the spirit of the brave–those who strive for their freedom against all odds,” Nhojj explains. He will perform a set of his award winning music later that day, including a new version of “Fighting for Love (the Warrior Song).” Also performing will be multi-platinum recording artist Taylor Dayne, and American Idol sixth season runner-up Blake Lewis.

Nhojj kicks off the tour on June 3 in Kansas City , MO. He will give a special performance at the “Show Me Pride” annual Quilt Dinner, an evening of remembrance as well as a celebratory hope for a future with a cure for AIDS. The Quilt Dinner and the Quilt Tent Display have become staples of the “Show Me Pride” Festival, one of the nations largest displayers of quilt panels.

Other cities on the Nhojj American GAY Pride Tour are:

Nhojj made history twice in the last five months. Primarily he became the first ever black male to win an OUTMusic award for his song “Love,” voted 2009 Outstanding R&B/Soul Song of the Year by The Alliance of LGBT Recording Artists & Performers. Nhojj received congratulations from BET/Centric TV Soul Sessions for being a “Black history and a gay history first!”

More surprisingly his gay music video “Love” made it all the way to the #1 spot on the mainstream MTV Music Top 100 chart, ahead of Justin Bieber and Taylor Swift. It is one of the most viewed videos on the MTV Music All Time chart.

Nhojj has recorded six CD’s and a DVD directed by Emmy-nominated David Cote. He has been featured in The Advocate and A&U America’s AIDS Magazine.

Read my other posts mentioning Nhojj by CLICKING HERE.