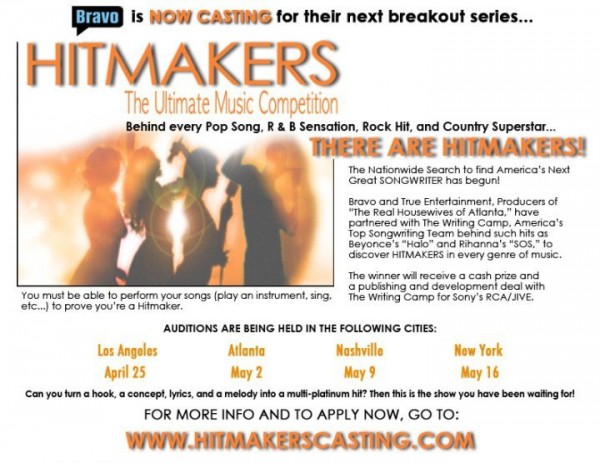 NEW YORK – April 21, 2010 – Grab your guitars and get your singing voices ready – Bravo is on the hunt for the next great songwriter for its newest competition series in development “Hitmakers,”(wt) featuring undiscovered singer-songwriters, talented newcomers battle through a series of innovative songwriting challenges to find out who’s ready for the top of the pop charts. The network is partnering with The Writing Camp, America’s top songwriting team behind such hits as Beyonce’s “HALO” and Rihanna’s “SOS,” to discover the nation’s top talent in every genre of music. The winner of the series will receive a cash prize and a publishing and development deal with The Writing Camp for Sony’s RCA/JIVE.

Open casting calls for talented and original songwriters interested in competing in the series will be held in cities across the country starting this weekend. Information on casting calls below:

Additional casting information for “Hitmakers” is available at www.Hitmakerscasting.com.

“Hitmakers” (wt) is an elimination competition series featuring undiscovered singer-songwriters, talented newcomers battle through a series of innovative songwriting challenges to find out who’s ready for the top of the pop charts. In each episode, the winning song will be revealed in a performance by a special guest star, some of the hottest singers today. True Entertainment (“The Real Housewives of Atlanta”) is developing this reality series for Bravo with Steven Weinstock, Glenda Hersh, Tim Bogart and Evan Bogart serving as executive producers. Bogart is part of “The Writing Camp,” one of the most powerful songwriting collectives in the business today, having written such worldwide hits as the Grammy Award winning “Halo” (Beyonce”), the #1 smash worldwide single, “SOS” (Rihanna), among countless others.

Bravo is a program service of NBC Universal Cable Entertainment, a division of NBC Universal one of the world’s leading media and entertainment companies in the development, production, and marketing of entertainment, news, and information to a global audience. Bravo has been an NBC Universal cable network since December 2002 and was the first television service dedicated to film and the performing arts when it launched in December 1980. For more information, visit www.BravoTV.com. Follow us on Twitter at http://twitter.com/BravoPR.