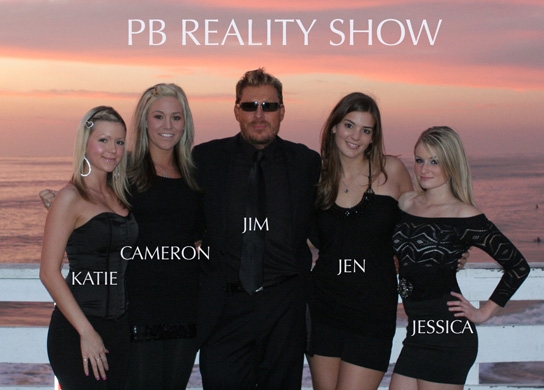 Hollywood and Los Angeles are well known for being the home of stars and celebrities, but now a tv show called “PB Reality TV” is bringing the paparazzi photographers to Pacific Beach San Diego.

April 10, 2010 (Free-Press-Release.com) — Reality TV has created a host of well known celebrities around the United States as many hit shows have hit the airwaves and grown a large fan base and following.

New Jersey has Jersey Shore, an MTV show with a cast of college students and east coast locals.

Hollywood has the Kardashians and “The Girls Next Door” and now San Diego has “PB Reality,” a new reality show featuring Pacific Beach millionaire Jim Lawlor and his group of “Angels” and model assistants.

The show has begun airing “behind the scenes” clips as the cast and crew begin filming episodes of Lawlor’s millionaire lifestyle.

The show takes place at the “PB Castle”, which is San Diego’s most popular beach community Pacific Beach. The show has begun getting a buzz as locals and visitors have begun seeing Lawlor and his model assistants attending popular parties and clubs along with throwing some huge VIP parties.

As the show begins to take off and grow a fan base it has also gotten the attention of local photographers and paparazzi who are now targeting the cast for photos in local, regional and national publications.

“We have seen a large increase in photographers and fans taking photos and at some times chasing our reality cast members while out in public,” said PB Reality spokesperson Mark Fitgerald. “Although it can be a bit of a challenge to avoid being noticed in public, the PB Reality cast is handling their new found fame in an upbeat manner” Fitzgerald continued.

“PB Reality” covers the lifestyle of millionaire Jim Lawlor and his group of 4 angels, who while helping Lawlor throw VIP parties and helping the homeless also pursue their own dreams and goals. The cast includes “Jen” who is working on becoming an actress, “Katie” a part time teacher trying to pursue a singing career, “Cameron”, who is actively pursuing a modeling career and “Jessica”, who is a communications major at San Diego State university.

In addition the cast of “Angels” there is also a large number of models and “party girls”, who also are included in events and the filming of the PB Reality TV Show.

The popularity of the show and the sexiness of the cast is one of the reasons that fans and now paparazzi are chasing them down to get photos and autographs.

The PB Reality TV show has not yet major airwaves but is scheduled to do so by Fall of 2010 which is leaving Lawlor to wonder how much crazier things can get.

If the “behind the scene” clips are any indication of the future, Lawlor and his “Angels” are going to be seeing a lot more photographers and paparazzi at future events and while out in public.

See Lawlor and his group of angels and models chased by paparazzi in the video link below.

For more information on PB Reality visit the PB Reality website at http://www.pbreality.com.