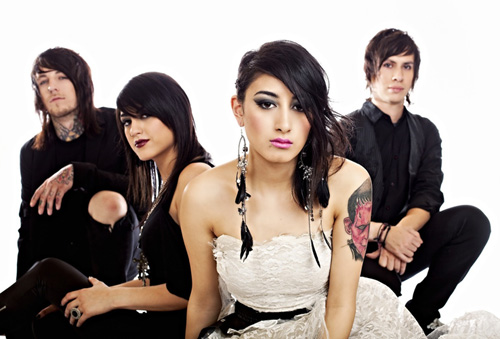 With the release of their highly anticipated third album, everyone is watching Eyes Set To Kill. The Phoenix based group has quickly become one of the most talked about groups in the scene after their two previous efforts garnered significant critical acclaim. With “Broken Frames” due out June 8th via Break Silence Records, Eyes Set To Kill has recorded their most aggressive album to date.

“We’re excited for fans to finally get a chance to hear material from our new record,” says Eyes Set to Kill front woman Alexia Rodriguez. “This record is quite a bit heavier than our last two albums, but I think fans will love it. We’ve already been playing some new songs while on tour and fans have been going crazy every night.”

Download a FREE MP3 of “All You Ever Knew” http://tinyurl.com/estkmp3.

Recorded at Wade Studios in Ocala, FL with producer Andrew Wade, “Broken Frames” takes the sparkling melodic prowess that Eyes Set To Kill has become known for, and shows the band stepping outside of their comfort zone to create the next chapter in their growing musical evolution.

“Andrew Wade is really the first producer that ever challenged us as a band and took us out of our comfort zone. He made us try things that we probably wouldn’t have done in the past,” Rodriguez said. “Andrew had me try a lot of different things and he was the one that suggested I try singing an octave higher for this record, which really helped me try and find my voice as a vocalist.”

Eyes Set To Kill’s first album was the release of their 2008 debut “Reach,” and the band wasted no time recording a sophomore album and released “The World Outside” in 2009. The album received widespread critical acclaim and the group was plugged on the front page of USA Today, as one of Alternative Press Magazine’s “100 Bands You Need To Know,”and hosted an episode of MTV’s Headbangers Ball. In early 2010 Alexia and Anissa Rodriguez were nominated for a Revolver Magazine Golden Gods Award in the “Hottest Chicks In Metal” category alongside some of the biggest names in hard rock and metal.

Eyes Set To Kill will be appearing all summer long on the 2010 Warped Tour alongside Alkaline Trio, Dropkick Murphy’s, Every Time I Die, and more.