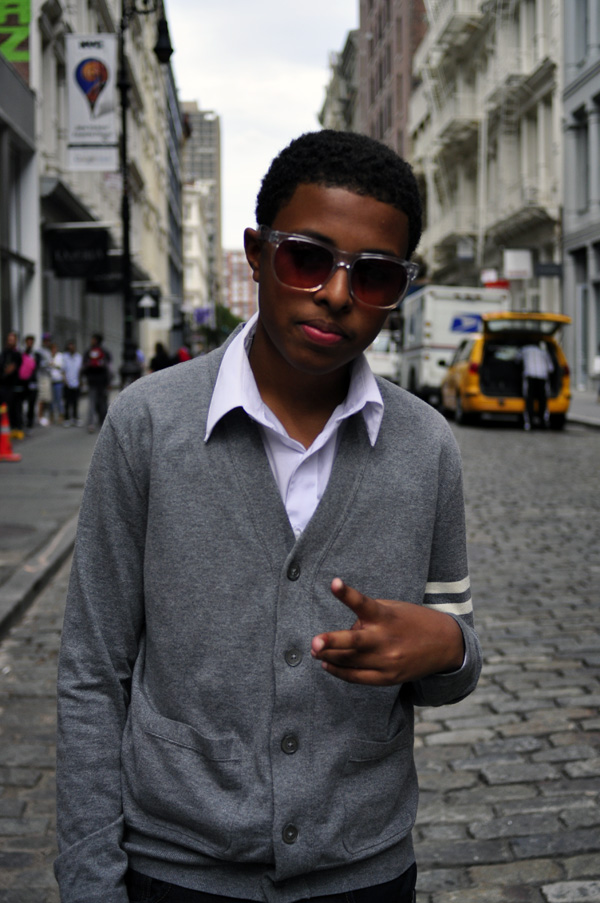 Daniel “Diggy” Simmons is definitely carrying on the Simmons legacy. With a raps that are contagious enough to land over 100,000 downloads of his “The First Flight” mixtape just through from own blog Life of The Jet Setter, a recently announced record deal with Atlantic Records, and a new men’s shoe line called Chivalrous Culture scheduled to debut in August 2010, this 15 year old is a millionaire mogul in the making and possessing the online media savvy to make it happen.

I finally caught up with Diggy earlier today, and here’s what he had to say:

Ifelicious:  How’d you get the nickname “Diggy?”

Diggy:  The name ‘Diggy,’ it came from my aunt.

Ifelicious:  I see that you changed your blog layout recently.  Are you directly involved with the design?

Diggy:  It’s me that works on the posts of the blog and someone named Angelo Logan , a young dude from Virginia, and we connected, and he’s on his grind as well.  He’s very good with stuff with computers and he has his own blog as well.  He did the layout for my blog so shout out to Angelo Logan.

Ifelicious:  I saw from one your tweets when I was looking at your page that you were working in the studio with Justin Bieber earlier this week?

Diggy:  We weren’t even working.  We were just chillin’.  He’s in New York right now doing different things like ‘Saturday Night Live.’  He’s a good friend of mine so he just comes by.  Shout out to Justin as well.

Ifelicious:  Whenever I think of you, I think of him (Justin Bieber) in the sense that you’re both young, rising talent and he’s definitely just blowing up all over the place right now.

Diggy:  Oh ya.  Number one album and all of that.

Ifelicious:  It would be neat to see a collabo between the two of you.  It would probably be really hot.

Ifelicious:  Has Chivalrous Culture picked up distribution?  Where are you with your shoe line?  I saw the twitpic you put up there.  Is it going to be men’s and women’s footwear?

Ifelicious:  How did the whole mentoring relationship between you and Pharrell come about?

Diggy:  A few years ago, he was in my uncle’s office, and I was with my man Rasheed, and…it kind of took off from there.  It’s kind of a big brother and a mentor relationship.

Ifelicious:  You just had your 15th birthday which of course was followed by being signed to Atlantic which is big stuff.  Congratulations!

Diggy:  Thank you very much.

Ifelicious:  What did you do for your 15th birthday?  There was all this news about you being signed, but I was like ‘Did he have one of those MTV-like My Super Sweet 16 but I turned 15 kind of things?’

Diggy:  (laughs) No.  I’m not even into those at all…My actual birthday was March 21st and that was a Sunday.  The day before, Saturday, I just went shopping around The City.  Sunday, the day of my birthday, I just spent it with some friends and family, and then the day after, I ended up getting signed to Atlantic Records that Monday.

Ifelicious:  Wow!  That’s big.  Of course, that’s probably the best part.  So next year, you’re not going to have the big fly-mobile out in the driveway on your 16th birthday?

Diggy:  No, no, like I said, I’m not even into all of that.  I’d rather fly out to like Japan or Paris or something.  Maybe something cool like that.

Ifelicious:  What do yo like to do on your down time…other than sleeping and maybe on Twitter?

Diggy:  I’m home schooled during the day, and then after I do everything else between the music and the fashion, I play basketball.  I play tennis.  I chill with friends and do different things like that.

Ifelicious:  You know that ladies want to know do you have a girlfriend?

Ifelicious:  I thought you were going to give an answer like that, but what’s it like having girls going all crazy over you?

Diggy:  Since the show (Run’s House) dropped when I was like 10, it just escalated with the girls, and even the age range range it even goes crazy.  So, it’s definitely flattering, and I love it.  What 15 year old kid wouldn’t?

Ifelicious:  A friend of mine who’s name is Lorna and has a blog called The Fabulous Report wanted to know:  What’s your first love?  Music or fashion?

Diggy:  They have equalization in my life.  A lot of people ask that because a lot of people know me from the fashion first and the music side second, but they’re both equal.

Ifelicious:  Do you have any other interests?

Ifelicious:  I’ve been wondering, is your family as close knit as they appear to be on the show?

Diggy:  Oh ya, most definitely.  Just my sisters live in LA, but we all try to get together as much as possible.

Ifelicious:  Speaking of your sisters, have you ever considered or are in talks about having your own spin-off show?

Diggy:  It actually has been in talks, but I’m not too fond of having my own show.

Ifelicious:  I know the media can be quite harsh and invasive as you’ve probably seen already.  How do you plan to deal with that as your fame continues to grow?

Diggy:  Definitely just staying out of it as much as I can. It’s not focusing on what everybody’s saying about me.  It’s focusing on the positive and not the negative.

Ifelicious:  So do you think that people ‘stay out of it,’ as you say, is just by not commenting on stuff when rumors come up?

Diggy:  I mean, if it’s a big enough rumor, of course, anybody would have to speak on it, but just not focusing on all the comments and all the bad things that people could say, I don’t really pay attention to.

Ifelicious:  Can you sing at all?

Ifelicious:  I heard a rumor that you were going to be changing management.

Diggy:  In the beginning, I didn’t have management, but my management now is Chris Lighty…He just became my manager as of last week.  I’ve been doing everything independently up until like now that I’m with Atlantic.

Ifelicious:  Now that you’re with Atlantic, are you working on an album?

Diggy:  Ya, we’re in the beginning stages of that and a whole bunch of different things that I want people to look out for.

Peep this interview between Sway from MTV and Diggy about the success of Diggy’s “Made You Look (Flow Stoopid)” freestyle.