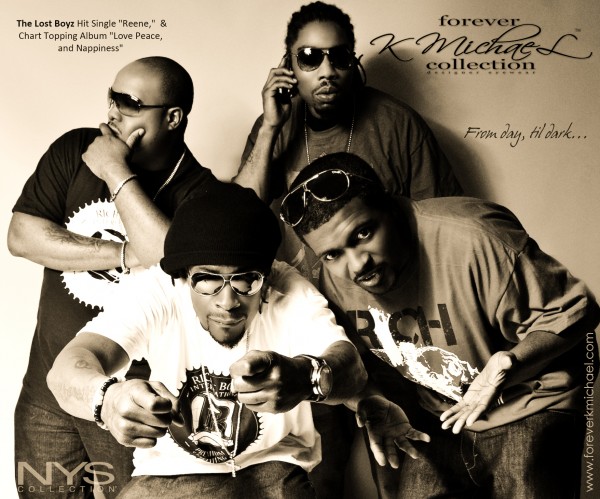 April 5, 2010 – ATLANTA, GA – Founder of the Forever K. Michael Collection, Khristian Michael, announced today that the renowned hip hop group, the Lost Boyz, have officially signed on to the company’s “From Day, Till Dark” campaign. The South Jamaica Queens, New York natives are the third musical artists to officially be endorsed by the company.

The Lost Boyz jumped feet first onto the music scene in 1995 with a highly-acclaimed debut album, Legal Drug Money, which included five chart-topping singles and an ultimate certified Platinum status by the RIAA (Recording Industry Association of America). Mr. Cheeks, Pretty Lou and their newest members, Dramatic Da Dj and Black Smoke are now part the brand new eyewear campaign that pays homage to artists who inspired the designer. The Lost Boyz will be featured in a variety of Forever K. Michael print, television and online ads—along with other notable artists in the campaign.

The company’s Founder, Khristian Michael, says “The Lost Boyz remind me of a timeless entity…when something isn’t trendy, it never goes out of style. Their sound and energy has continued to resonate in their fans over a decade, and that’s what I’m looking to achieve with the new campaign—as well as the entire collection.”

“We’re happy to be a part of the Forever K. Michael [artist] campaign. Inking an endorsement deal with Khristian Michael was a no-brainer because his designer eyewear is crisp, classic, and universal–just like our music,” said the Lost Boyz about the new venture.

“Music is the backdrop to everything that goes on in my life—including my business endeavors. When I envisioned my brand, it too included a soundtrack of great music…and I wanted the Lost Boyz to be a part of that,” says Forever K. Michael Collection Founder, Khristian Michael. “They made a huge contribution to urban music and that inspires me personally and creatively. I’m just giving back to artists, like the LB Fam, who motivate and inspire me to keep creating.”

The Lost Boyz are gearing up for the release of their brand new studio album and subsequent tour. Learn more about the group, their music, promotional events and products from the Forever K. Michael Collection at www.lostboyzmusic.com, www.twitter.com/lostboyz4ever and www.foreverKMichael.com.

About the Forever K. Michael Collection:
Forever K. Michael started as a seed in the spirit of the Founder, Khristian Michael. A long-term passion and affinity for high fashion urged the young stylepreneur to embark upon his own journey through the business landscape. In 2009, the Forever K. Michael Collection was put into motion and ultimately became a joint venture with renowned eyewear retailer, NYS Collection. The unique designer eyewear line is entirely handcrafted and constructed with Grade “A” materials to ensure quality and authenticity. With a sleek and sexy designer line poised to launch in the spring of 2010, both the media and consumers are abuzz with anticipation of this new brand that will be available in fine retail worldwide.