You are here: Home / ifelicious music / RnB spotlight: Interview with Leela James on “My Soul” and BET talk show 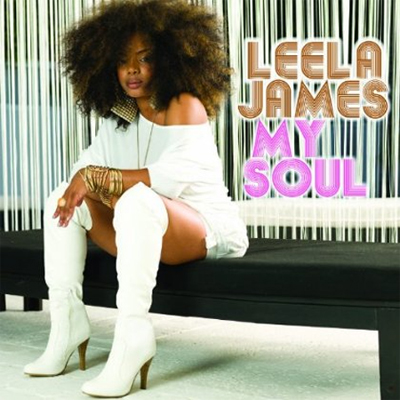 A few months ago, I posted a press release about Leela James with a copy of her lead single “Tell Me You Love Me” from her upcoming album “My Soul” due out on May 25, 2010 (see my blog post “Leela James ‘Tell Me You Love Me’…“).  It was my first time listening to Leela James.  There’s something about her voice that is beautifully distinctive, folksy and current yet soulful as if she’s channeling the greats like Aretha Franklin or a Chaka Khan.  If you haven’t checked out the single, I’m posting it again below for you to listen and download.

Here’s my interview with Leela…

Ifelicious: I know that you’re not new to the R&B scene but I know you’ve changed record labels recently. How has that change been so far?

Leela: The album is on Stax which is a legendary soul label and I’m very excited to be there now. It’s my new home.

Ifelicious: How did you come up with the title for your album?

Leela: The album title “My Soul” came from being able to express myself in different ways with this record and still be consistent with delivering my soul, whether the track sounds more hip hop or more straight R&B, it’s still a part of my soul.

Ifelicious: I like the song “Tell Me You Love Me” and I’ve been getting really good feedback on my blog. It’s a really pretty song. What made you lead out with that single?

Leela: Thank you. It was just one of the tracks on the album that really stood out.

Ifelicious: Are you starting to get some radio play from it? I saw that there’s a video out, too.

Leela: Ya, ya, it’s starting to get a lot of radio play especially more back east and some of the southeast area.

Ifelicious: What’s your favorite track on the album? Have you recorded everything?

Leela: Ya, I recorded all of the songs. The album is completely done. It’s really hard to say what my favorite track is. They’re all kind of like my little babies. You love them for different reasons.

Ifelicious: Do you have any tour plans coming up?

Leela: Ya, actually I’ll be touring this summer, and I have a few promo things next month (April) in Philly, Baltimore, and Chicago. You just gotta pay attention to me on the Twitter, the Myspace, Facebook, and my website to find out where I’m going to be.

Ifelicious: Do you have any other artists that will be performing along with you?

Leela: I’m not sure. I know my agent is working on some things that I can’t go into until they are solidified.

Ifelicious: For your singing career, where was that turning point for you? Was there a particular moment when you turned to yourself and said, “Wow, this is going to happen.”

Leela: I would say when the first album was released because I had been signed and on the label for several months, well actually for a few years before they actually released the record, and just going through the politics of that process was a little annoying so when it finally got released…it was going to happen finally.

Ifelicious: Are there any newer artists out there that you like in particular?

Ifelicious: Do you see yourself doing anything else besides music down the road?

Ifelicious: Can you say the name of the show?

Leela: Sure, it’s called ‘My Black is Beautiful’ and we’ll be talking about a lot of issues concerning women.

Ifelicious: Will it be more of a daytime thing?

Leela: It’s kind of like ‘The View’ meets ‘Tyra Banks.’

Check out the video for “Tell Me You Love Me”

Thanks to Simone Smalls PR for helping to make this interview happen.  😉