You are here: Home / ifelicious tv / The City / Next season of “The City” returns April 27 on MTV 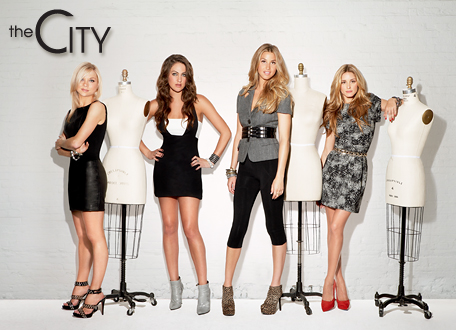 I put “next season” in my post title because MTV is showing it as Season 2 and I agree with commenter “Desiel” on the MTV.com “The City” page with the trailer. that believes it’s season 3.  I’m sure someone reading this will be overjoyed to make the correct call.

Hurry up month of April!  There’s so much great programming returning to TV.  I don’t know if I’d classify “The City” amongst the ranks of “great” programming, but I still keep watching the show.  The only thing that keeps me holding on is the drama with Olivia and Erin.  From what I read on MTV’s Remote Control Blog (see “Make Room for more mean girl action on season two of ‘The City’“), the drams shall continue.  Whitney, well apparently her backbone is growing stronger and her backing from Kelly Cutrone continues.  I like Whitney, but she makes for boring TV.

When Season Two premieres, Whitney gets a last-minute, chance of a lifetime: her own show at New York Fashion Week. After the chaos and fanfare of showing her line in the Bryant Park tents subside, Whitney has more to do than ever in order to prove herself as a viable, emerging designer. First up, is creating a new line for the new season and learning from Kelly Cutrone the best way to promote herself and her brand. She still has Roxy in her corner—and Roxy owes her—for giving her a place to crash and for getting her a job at People’s Revolution, but Roxy is learning that she’s too strong-minded to live in Whitney’s shadow.

At Elle Magazine, Olivia and Erin are tasked by Joe Zee to find some way to get along. However, their competition is far from over as Olivia is offered an on-camera job by Joe. But Erin is at the top of her game, and sees through Olivia now more than ever. While climbing the ladder at one of the largest fashion magazines in the world, these two girls are about to discover there’s only room for one at the top.

MTV has dominated the Tuesday, 10p.m. hour with young women since moving “The Hills” and “The City” to Tuesday nights on September 29, 2009. Both series were #1 in their time periods across cable with F12-34. The network’s Tuesday night success continued with Season One of “Teen Mom” as the series also went on to become #1 in its time period with F12-34. Currently, “16 and Pregnant” is #1 in its time period across all cable competition and #2 versus all television competition among F12-34.

Check out the Season 2 trailer below…

Read all of my posts about “The City” by CLICKING HERE.