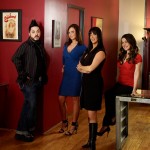 I haven't written about "Millionaire Matchmaker" but I find myself watching it more and more.  It's another one of those reality TV formulas where curiosity gets the best of you.  I'm so intrigued the range of people who fall into the millionaire category, male and female, and their struggles to find true love.  Just goes to show you that money doesn't make everything in life … END_OF_DOCUMENT_TOKEN_TO_BE_REPLACED

I put "next season" in my post title because MTV is showing it as Season 2 and I agree with commenter "Desiel" on the MTV.com "The City" page with the trailer. that believes it's season 3.  I'm sure someone reading this will be overjoyed to make the correct call. Hurry up month of April!  There's so much great programming returning to TV.  I don't know if I'd classify "The … END_OF_DOCUMENT_TOKEN_TO_BE_REPLACED