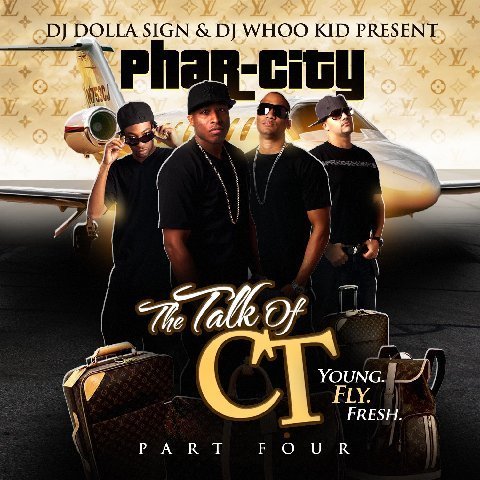 Hartford, CT — Although Connecticut has birthed dozens of successful pop artists, including Michael Bolton, John Mayer, The Carpenters and Cassie, the state has yet to produce a Hip Hop superstar. The four men of Phar-City are proudly representing their state, stepping out with a sound and style influenced by both their humble surroundings and the lavish taste of today’s youth.

With three strong “Talk of CT” mixtapes under their belt thus far, two hosted by New York’s Hot 97/Sirius Radio powerhouse DJ Kay Slay, the group is putting the final touches on Part 4 of the series. The new mixtape is slated for release on March 30, 2010, and will be hosted by DJ Dolla Sign and DJ Whoo Kid.

Phar-City’s current single “Part Time Lover” features crooner Range, and is impacting their local radio stations as the group prepares for the release of the official video. Other recent collaborations with the likes of Ray J, Trey Songz and T-Pain have earned Phar-City new fans nationwide, and they are steadily recording fresh music for their upcoming debut album.

“We want to have a well-rounded album, and touch on the things that we’ve gone through coming up in this game as artists,”Crisis explains. “We get across the struggles, but also the fun side of things. We definitely will have a fresh sound for the project, which in our eyes is definitely classic material.”

For the time being, the group is focused on “The Talk of CT 4” project, which includes six original songs. Phar-City’s Beatdown produced five of the tracks, while DJ Static, known for his win at the ’07 Rawkus Soundbombing Producer Battle, produced the lead single “Part Time Lover.”

The video for “Part Time Lover” features a bevy of beautiful, sultry actresses, and the members of Phar-City hope that fans will be sonically pleased as well. While this song represents just one facet of their musical repertoire, they do have every intention of representing their home state with quality from their years of hard work.

“Connecticut’s music scene is special, in that it’s new and different,” Sho-Off explains. “Phar-City has a sound that the rest of the world has not heard yet. We have been rapping for a while, and it’s time everyone understands that Connecticut is here to stay. We work hard, and we make music for the people. Phar-City’s sound will stand out in the forefront of this movement.”

The Connecticut music scene has been thriving locally for decades, although few artists native to the small state have made an important impact on today’s Hip Hop and Pop music scenes. The men of Phar-City are focused on bringing their sound out of Connecticut, and beyond the realm of the Northeast region to touch the world.

Each member of Phar-City brings something unique to the table, uniting the gritty witticism of Crisis, Sho-Off’s smooth lyrical hustle and Pro’s undeniable street magnetism with the innovative musical mastery of Beatdown.

Perfection-driven, the group works intently to get the right sound for each track they produce. “It just works, there’s no way to explain it really,” says Beatdown of their chemistry. “We just go in, and a few hours later a hit is made. We criticize each other’s verses and I think that makes us a strong team. We do this for the fans that don’t want to hear the same stuff they’ve been hearing for the past few years.”

Phar-City has a knack for reaching their fans that eludes most indie acts. “It’s crazy to me that people really f*ck with us hard because of how much they like our music,” Sho-Off expresses. “I don’t know why these Hollywood stars get aggravated with people stopping them to take a picture or to get an autograph. Not a lot of things beat the feeling of fans appreciating your work. You have no business if there is no demand for your product. The fans are your customers, so you always have to take care of them.”

The crew’s passion for their fans carries over into their performances, as they strive to connect as personally as possible. “Our live show is energetic,” says Beatdown. “We don’t hop on speakers or stage dive, but we definitely give people a show. We always bring a few goody bags to show the fans some love, like bringing girls roses and throwing t-shirts out.”

Throughout the development of their official debut album, Phar-City continues to regenerate their creative energies for each new song. “We want to have a well-rounded album, and touch on the things that we’ve gone through coming up in this game as artists,”Crisis explains. “We get across the struggles, but also the fun side of things. We definitely will have a fresh sound for the project, which in our eyes is definitely classic material.”

“A lot of new ideas come daily,” Beatdown continues. “As of now we have some sexual songs, some ‘get money and grind’ songs. I come up with a lot of hooks while I drive on the highway. Crisis knows. He was with me when I wrote the ‘Part Time Lover’ hook. Kids, don’t drive and text! As the producer, I just experiment with sounds and blend them together. I hate using the same drums twice, and I’m always getting inspiration from oldies songs.”

The importance of relating to fans outside of their region is vital to Phar-City, and their foundation with music in their home state thus far has definitely set the proverbial stage for success. “I think we’re important to Connecticut, because we’ve been the most consistent group out here,” Beatdown asserts. “Our Talk of CT mixtape series is serious, with over 50,000 sold. It’s to the point where we have to drop a new one, because the people in the streets are asking for it.”