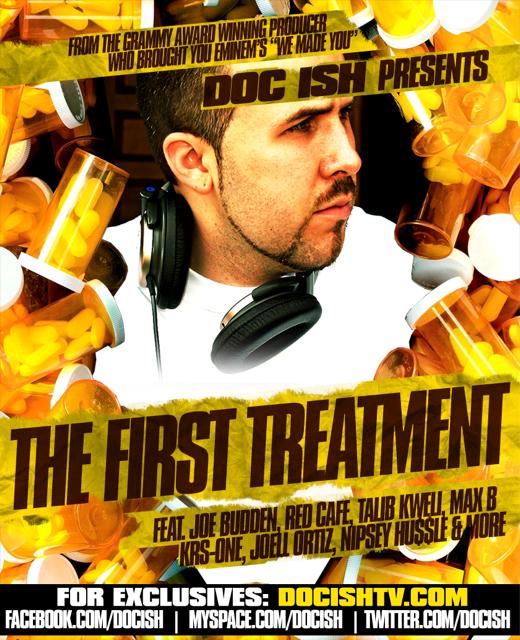 A bit of a transient, Doc Ish is from a little bit of everywhere. Born in Dallas, TX, then onto places such as Virginia, and Brooklyn NY and everywhere in between, it has been Hartford, CT that Doc has always returned to and calls home. Doc signed his first deal as a senior in high school and soon thereafter moved to NY where he was introduced to a slew of industry talents and had the opportunity to work with artists such Heavy D, Kurupt and Foxy Brown to name a few.

Since then, Doc has lost a lot of time, “years,” in regards to his music career. For years, he was jumping from doctor to doctor, hospital to hospital, trying to figure out why his health would take such dramatic shifts and leave him in an almost debilitating state. Lying in hospital beds, with nothing but time on his hands while his various health problems were both diagnosed and treated, Doc’s health eventually got better and when it did, so did his hunger for making music. When Doc re-entered the scene in 2008, he did so with a renewed vigor and his networking lead to meetings with various artists, one of which, D-12’s Bizarre, would eventually change his world as he then knew it upside down. After recording sessions with Bizarre, Doc received a call from him that a certain Detroit superstar heard one of his tracks and immediately gravitated to it. That track was what you know as “We Made You” the lead-single from Eminem’s Grammy award winning LP “Relapse,” which has since gone 2X Platinum and re-vaulted Eminem back into the national spotlight after a five-year hiatus.

Despite the overwhelming changes that have occurred since “We Made You” hit the masses, Doc Ish has remained humble and hungry throughout the process and is determined to capitalize on the opportunity and use it as a stepping-stone. The timing and subsequent spotlight that has been affixed to Doc’s back ever since was ideal for the forthcoming release of “Doc Ish Presents: The First Treatment” which will be released on May 11, 2010.

“The First Treatment” includes a collection of iconic and legendary emcees that would make a major label blush, let alone one of an independent nature. While “Cut My Throat” f/Saigon, INS Deck, Ransom and Quan has already made an immediate impact on the urban blogosphere, fans are already salivating over the LP’s assortment of talent and eagerly awaiting to hear tracks such as the dream-team pairings of Jay Electronica, Crooked I & Sean Price (“She Did It Again”) and Bun B, Joe Budden and Talib Kweli on “Is It A Dream.”

Doc Ish believes that music is cathartic and creating this project proves as much and “The First Treatment” is the next step in curing Hip-Hop’s ailments.

***All Tracks Produced By Doc Ish