You are here: Home / ifelicious music / The legendary Mr. Kane/Kokane to release new solo LP “Gimme All Mine” on June 1 (free mp3 download) 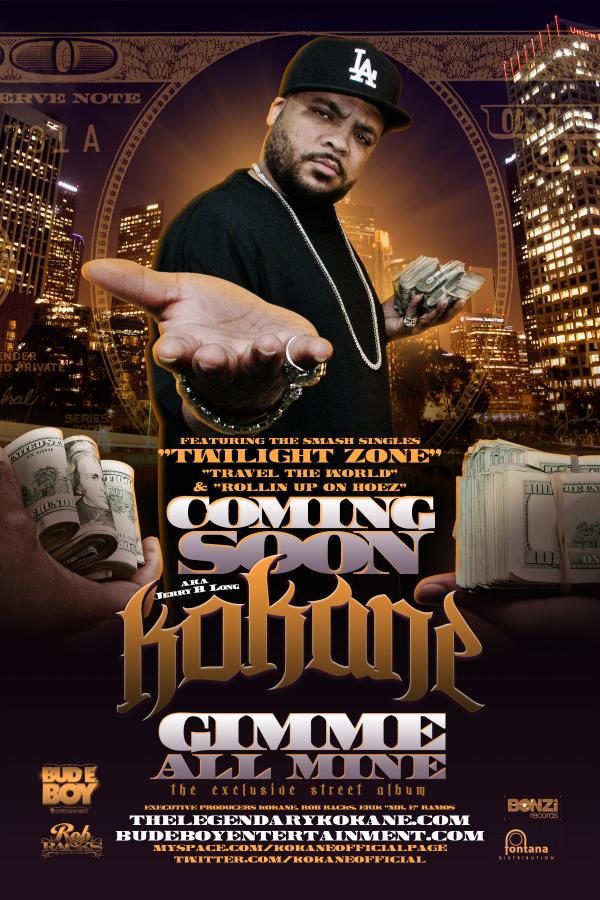 “Gimmie All Mine” features a reunion track with Above The Law and production from Tha Chill (Compton’s Most Wanted) and Vitamin D.  You Know The Voice, Get Ready To Know The Person Behind It.

LOS ANGELES, CA — To say that music courses thru Kokane’s veins would be an understatement, as besides being an accomplished multi-dimensional artist (writing, producing, rapper, singer) in his own right, he is cousins with Big Hutch of the groundbreaking California duo known as Above The Law and made numerous appearances on their “Uncle Sam’s Curse” LP and he is the son of legendary Motown composer Jerry Long who composed hits such as “Just My Imagination,” “Ball Of Confusion” and “Still Waters Run Deep” (among many others) as a key contributor in the shaping of Berry Gordy’s Motown Records.

When discussing the West Coast’s most legendary and influential hip-hop artists, the talk often turns to a common theme; NWA, Dr. Dre, Ice Cube, Eazy-E, Snoop Dogg, Too Short, etc, and Kokane has worked with them all (including co-writing NWA’s “Appetite For Destruction” and providing the crooning found on Dr. Dre’s epic masterpiece The Chronic 2001) and while Kokane’s impact on the West Coast Music scene maybe understated—its also undeniable. From his roots with Above The Law, to his solo-deal with Eazy E’s Ruthless Records (where he released two solo-LP’s), being signed to Snoop Dogg’s Dogghouse Records and subsequent collaborations with hip-hop’s most talented and top-selling artists including Dr. Dre, Snoop Dogg (he was predominantly featured on “Tha Last Meal“), 50 cent, Jadakiss, Xzibit, Young Buck, Spice 1, Too Short, NWA, Ice Cube, Bootsy Collins, George Clinton and countless other appearances has resulted in Kokane’s being the most featured artist in the world and his voice being included on over 35-million record sales over the course of his long and storied career.

With his seventh solo-LP, “Gimme All Mine,” (in-stores June 1st, 2010) Kokane aims to get his due respect and he does so by delivering a project that will appeal to every hip-hop fan of all regions. Though he made his name with unforgettable guest appearances, aside from an essential re-union track (“Lay You Down”) with his Above The Law family, Kokane rejected the feature heavy trend that is so prevalent in today’s hip-hop industry on “Gimmie All Mine” in favor of the merits of his own voice. Tracks such as the explosive single “Twilight Zone” (which is already creating a heavy viral presence on the Internet and will be available on iTunes on April 20, 2010), “Made A Difference” (a modern day “Today Was A Good Day”) and the gangsta gospel “Killing Fields” all include a discernible West Coast vibe, while tracks like the bouncy “Rollin Up On Hoez” contains the energy that southern rap fans admire so much.

Kokane’s “Gimmie All Mine” will be available at all retailers and online outlets on June 1, 2010 and will be released by Kane’s own Bud E Boy Label in conjunction with Bonzi and Fontana Distribution.

Tracklisting and credits for Kokane’s Gimmie All Mine LP: