Aaaaah! I’m screaming like the young gal I was when Dru Hill first came out! *throws panties on the stage* LOL!  🙄 If you’re also a fan, you’ve gotta read my Valentine’s Day 2009 concert recap “90s Love Tour with Dru Hill, Silk, Kelly Price, and Adina Howard. Best concert I’ve seen in a while!!!”

Dru Hill (druhillonline.com) is bizzack with the album “inDRUpendence Day” to be released on April 13, 2010 on the Kedar Entertainment label.  They are also filming a reality TV show (who isn’t these days??) that will air later this year on the Centric Channel.  The debut single off the album is called “Love M.D.” and can be downloaded on iTunes.

According to the press release:

The pre-release single “Love M.D.” is a powerful mid-tempo ballad that presents an honest depiction of a troubled relationship and goes beyond other attempts to shed light on abuse in the character’s appeal to seek professional counseling to help them get back to the love they used to share.

You can also catch up with Dru Hill member Nokio on the Kiki Miller Report‘s (www.kiki-miller.com) “Reverse Interview” live on Monday March 15, 2010 at 10:30 AM CST. The Kiki Miller Report airs on World Vibe Radio (www.worldviberadio.com). The interview with Nokio will also air again on Wednesday and Friday at the same time. 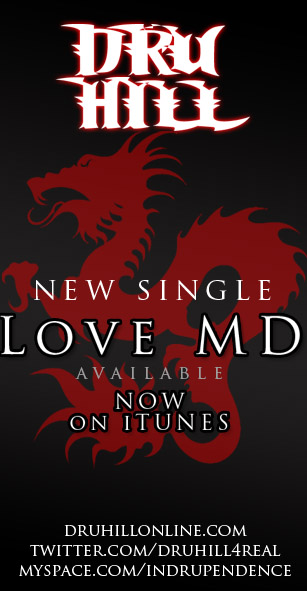 Here’s a few more excerpts from the press release:

Founded in 1995 in the Druid Hill Park neighborhood of Baltimore, three of the original members of Dru Hill — Tamir “Nokio” Ruffin, the other co-founder Mark “Sisqó” Andrews, and Larry “Jazz” Anthony — recruited Antwuan “Tao” Simpson in 2008 to complete the quartet after fourth original member James “Woody” Green left the group to focus on his gospel ministry. The group is managed by Kevin “Mpeckable” Peck, a marketing executive known as a “dream merchant” who has been with the group since the beginning.