You are here: Home / ifelicious music / VNV Nation announces US tour in support of “Of Faith, Power and Glory 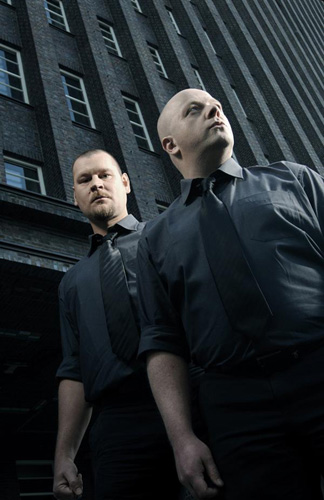 “In the late 90’s I was introduced to a lush, beautiful band that blends melody, undeniable beats and pure emotion in a way that proved that the dark electronic scene had undergone a renaissance. That band was VNV Nation. In their honor I have a “Dark Angel” tattoo that commemorates my return as a fan to revitalized genre. 10 years later they still continue to inspire me.” – Davey Havok of AFI

New York, NY – In support to their widely-hailed seventh studio album “Of Faith, Power and Glory” on Anachron America, electronic rock pioneers VNV Nation will be launching a national tour in San Francisco on March 16th and circling the states (tour dates below). The special guests on select shows include [:SITD:] (www.myspace.com/xsitdx) and Aerodrone (www.myspace.com/aerodrone). Kicking off what will be a very busy year, the Irish/English duo will also be releasing “Crossing the Divide,” a collection of remixes from their current album by Jade Puget from AFI, Rotersand, Reaper, Leæther Strip, Architect and more and will be released in May 2010 (more info soon).

A lush and orchestral return to form, “Of Faith…” has received plaudits and praise from the likes of All Music Guide (“In a world where bands like the Hold Steady and the Gaslight Anthem get praise for similar sentiments delivered via rock & roll, there seems to be no reason why VNV Nation shouldn’t get some credit of their own”) to ReGen Magazine (“VNV takes futurepop on its next step in evolution…”).

Evolving their trademark sound by augmenting it with even crisper melodies and stronger hooks, “Of Faith…” is an alt-pop pantheon of sharp and soothing keyboards, full and hearty rhythms, and synthpop dancebeats that both embrace their seminal and illustrious past while looking straight ahead into the future. From the lushly atmospheric and majestic opening track “Pro Victoria” to the powerfully propulsive “Tomorrow Never Comes” to the gentle piano ballad “From My Hands,” this is a strikingly warm album in a genre that tends to be cold, hard and isolating.

With their unique and formidable ability to combine very melodic, danceable electronics with haunting and powerful lyrics, VNV Nation have built a massive fanbase, playing to hundreds of thousands of fans at both their own sold-out shows and major rock festivals worldwide. Their massive hits “Standing” and “Dark Angel” are club staples that still pack dancefloors. “Of Faith, Power And Glory” was released on June 23, 2009 and charted on Billboard’s Electronic Charts at #5.