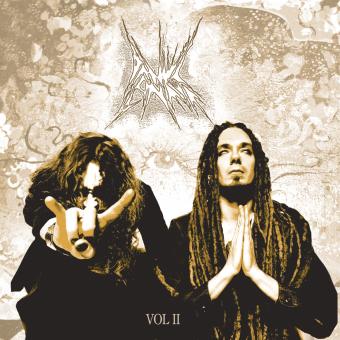 New song “I Have Never Wanted to be Number One” posted on band’s Myspace page.

The End Records is proud to announce the worldwide release of “VOL. II” from Daniel Lioneye (on Warner Bros. Records in Finland), the side project from members of HIM (www.myspace.com/heartagram), on April 27th. Consisting of Linde (HIM) on guitars, bass and vocals, Burton (HIM) on keyboards and Bolton (Enochian Crescent) on drums, the band has always embraced breaking boundaries and taking new directions, which is exactly what they did on their sophomore release.

Formed in 2001, Daniel Lioneye’s debut album, “The King of Rock ‘n’ Roll,” was only released in Finland and Germany and was a “tongue in cheek” psychedelic stoner rock album. Earning the group quite a bit of attention, the band played at handful of festivals in Finland which resulted in the title track being the theme song for Bam Margera’s TV show, “Viva La Bam.” Simply called “VOL. II,” the band’s North American debut is heavier than the band’s prior release, making it an extreme, yet melodic, rock n’ roll album influenced by black metal.

The first song available for listening on the band’s Myspace page is “I Have Never Wanted To Be Number One.” Linde had the following to say about the song… “This is no doubt the most accessible song on the album and believe it or not it was written about 5 years ago. It was meant to be an acoustic ballad but this album is not about acoustic ballads so we started to fuck around with it. At first I thought that it sticks out a bit too much from the rest of the stuff and wasn’t sure if I should include it. It sounded too serious and stiff to me. Then Burton came in with his 80’s keys and we added the blast beat part in the end and it changed my mind. Lyrically I guess it is about moving on. But it kind of raises more questions than gives answers and I like to keep it that way.”