You are here: Home / ifelicious music / Bullet for My Valentine’s 3rd album “Fever” April 27, US tour dates with Chiodos and Airbourne 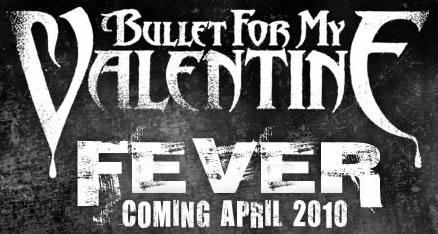 New York, NY- Bullet For My Valentine have announced dates for their US headline tour in support of the band’s upcoming third release, FEVER, in stores April 27th and featuring the blistering single “Your Betrayal” which was the #1 most added track on alternative radio. This marks the bands first trip back to American soil since playing the main stage at The Mayhem Festival last summer.

The tour starts in Worcester, MA on April 30th at the Palladium and concludes on May 30th in Detroit, MI at the Fillmore. Joining Bullet For My Valentine on tour will be Chiodos (www.myspace.com/chiodos) and Airbourne (www.myspace.com/airbourne). Tour highlights include New Jersey’s Bamboozle Festival on May 1 and Columbus, Ohio’s Rock on the Range on May 23rd.

“Fever” was produced by Don Gilmore (Linkin Park, Good Charlotte) and recorded in both Wales and Los Angeles. “Fever” is the follow up to 2008’s “Scream Aim Fire” which has sold over one million copies worldwide and debuted at #4 on The Billboard album chart.

Bullet For My Valentine have just wrapped up shooting 2 videos in support of their upcoming album and have revamped and launched a new website www.bulletformyvalentine.com, which is a one stop shop for anything Bullet! Stay tuned and check back to the site for updates and announcements!