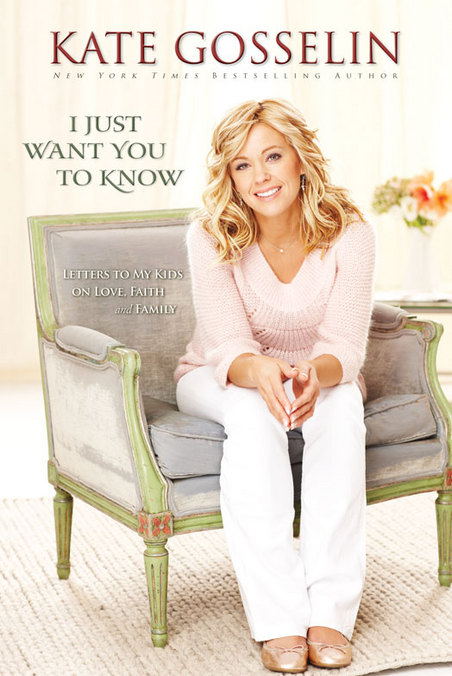 Besides the latest buzz about Kate Gosselin appearing on the next season of “Dancing with the Stars,” it looks like fans have another book to look forward to as well.  See press release below.  ~Ifelicious

GRAND RAPIDS, Mich., February 9, 2010 – Zondervan, a world leader in Christian communications, will release the next book by Kate Gosselin. “I Just Want You to Know: Letters to My Kids on Love, Faith and Family” continues Kate’s story of faith and family, picking up where her first book and New York Times bestseller, “Multiple Blessings,” ended.

“I Just Want You to Know” will contain excerpts, prayers, and memories from Kate’s journal, offering an intimate look at the heart of a mother during the three years her family transitioned from obscurity into the national spotlight.

The book will also include eight individual letters—one addressed to each one of her children. These cover a variety of topics, including the painful disappointment that comes when life does not go as planned, God’s faithfulness during such times of change, and the uncompromising love she has for her children.

“We support Kate as she moves forward into a new chapter of her life,” said Dudley Delffs, SVP and Publisher of Trade Books at Zondervan. “It is clear that her faith has been an integral part of her life and the lives of her children during the past year, and we are honored to give her the opportunity to share her heart.”

Kate Gosselin has the joy, frustration and honor of raising eight children—twins and sextuplets—in central Pennsylvania. The daily lives of her family were previously chronicled for five seasons on TLC’s hit show “Jon and Kate Plus 8.” Kate is a sought-after speaker, author of the New York Times bestselling books, Multiple Blessings and Eight Little Faces, and is currently in production on a new show for TLC.

“Each day the thought crosses my mind that when they get older, my kids are going to look back and think about how they were raised,” said Kate. “I know they will have a lot of questions about things that may not make sense because they were raised so unconventionally. I don’t want them to grow up and wonder; I want them to know without a shadow of a doubt how much I love them and how much every sacrifice made was worth it for them.”

I Just Want You to Know will release nationwide as a hardcover on April 13, 2010 with an announced first printing of 400,000.