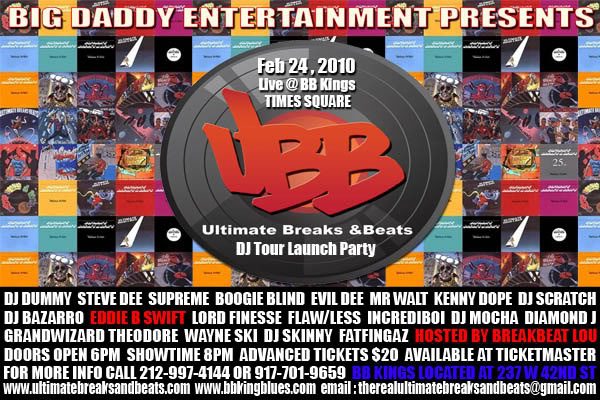 (New York, NY) — On February 24, 2010 New York will celebrate a major cornerstone in hip-hop history with the Ultimate Breaks and Beats Live to commemorate the original release of the Ultimate Breaks and Beats compilation (1981-1991) and its creators, the late “Breakbeat” Lenny Roberts and Louis “Break Beat Lou” Flores. The event will showcase some of the most talented DJs in New York City that will display their extraordinary turntablist skills as they pay tribute the music collection that transformed the face of hip-hop for over three decades. The historic night will take place at B.B. Kings with doors opening at 6:00 PM and the show beginning at 8:00 PM and will also serve as a launch party for the upcoming Ultimate Breaks and Beats national tour.

The Ultimate Breaks and Beats compilation played a pivotal role in shaping hip-hop by providing DJs with the essential tools they needed to create many of the popular party anthems of the era, legendary mixes, and ultimately the foundation of early hip-hop’s infamous eclectic sound. The 25 volume compilation was co-created by the late Breakbeat Lenny and Break Beat Lou who released the collection over a span of 10 years (1981-1991) as hip-hop was just beginning to take shape.

The compilation conveniently extracted drum breaks from hit rock, disco, and funk songs and created entire songs worth of what would become the most sought after beats providing a critical library for DJs and producers. This style become integral to every aspect of hip-hop from the DJ to the B-boys and B-girls to the MCs who rapped over the signature sounds, and now the hip-hop community will gather to pay respect in true hip-hop fashion.

“This night is a special moment for a lot of people not just me”, says Luis Flores “This is just another dope party; it’s the night when the DJ World’s elite honor the foundation of present day hip-hop.” A list of hip-hop’s whose who will be on hand to give riveting first hand examples of classic break beat turntabilism as they recognize Break Beat Lou and Breakbeat Lenny for their monumental contributions to what has become one of the largest global music genres ever, hip-hop.

Featured DJs at the UBB launch party include: