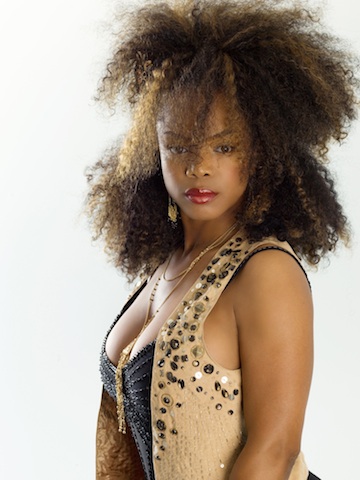 Listen to “Tell Me You Love Me” on the player below:

January 25, 2010 — From the very first track on her 2005 debut album Leela James has captured the gritty, emotion-drenched essence of artists like Aretha Franklin, Stevie Wonder, Mavis Staples, Marvin Gaye and has made it her mission to bring it all back – pushing the music forward with a fresh, contemporary perspective that remains faithful to the music’s deep and powerful roots.

My Soul, set for release on May 4, 2010 May 25, 2010, marks Leela James’ debut on Stax Records, a division of Concord Music Group. The move to Stax – the legendary home of some of the greatest soul and R&B artists of the past half-century – is a fitting destination for a vocalist who has committed herself to preserving the soul tradition.

The new album comes on the heels of high praise from soultracks.com, the online source for all things soul and R&B, who recently bestowed a 2009 Readers’ Choice Award to James in the category of Female Vocalist of the Year. Indeed, James has come to own the music that has inspired her since her teenage years. Her commanding live performances have become can’t-miss thrillers, placing her among today’s most electrifying international concert draws.

“The title of the album pretty much says it all,” she explains. “I just wanted to go into the studio and do what moved me at the time, and not think about it too much or not allow it to be something that was too planned. That’s what great soul music has always been about from the very beginning – something very raw, very authentic and very true.”

The first single off My Soul is “Tell Me You Love Me,” a track that James co-wrote with Andrea Martin and Gordon Williams. The track was produced by rap and hip-hop producer Gerrard Baker (Toni Braxton, Billy Crawford, Masta Ace), who deftly inserts a sample of James riffing on a line from “Then You Can Tell Me Goodbye,” the classic ballad made popular among soul audiences by the Manhattans in 1978.

“This is one of my favorite tracks on the record,” says James. “It’s a song about someone who’s really trying to make love work, which is the same message you hear in ‘Then You Can Tell Me Goodbye.’ Great songs are great songs, no matter when they’re recorded, or by whom. And sometimes two great songs blend together well, like they do here.”

Other noteworthy tracks on My Soul include the churning opener, “Ain’t New To This” (also produced by Baker), a proud and defiant declaration of survival in the minefield known as the music business; and the bouncy “Party All Night,” penned by James and produced by Carl “Chucky” Thompson, who previously worked with Leela on 2005’s Change Is Gonna Come. Other notable producers on that debut record were Kanye West and Commissioner Gordon among others.

Thompson also handled the production of “Mr. Incredible, Ms. Unforgettable,” a sultry duet between James and vocalist Raheem DeVaughn (see also my feature article in JENESIS Magazine on Raheem DeVaughn).  “Raheem and I are good friends, and we’d been talking for some time about doing something together,” says James. “We finally happened to be in the same place at the same time, and we just made it happen. It really wasn’t something that we planned. It was just something spontaneous that took its own course.”

Aside from Baker and Thompson, James enlists the services of a number of other producers on My Soul, including Kadis & Sean (“So Cold”), Carvin & Ivan (“It’s Over,” “If It’s Wrong”), Steven “Supe” White (“The Fact Is”), Ray Murray (“I Want It All”) and Butter (“Supa Luva”).

While James may have been surrounded by talent in the making of My Soul, the record is ultimately her personal statement – not just about the music’s rich past but about its present and its future as well. Her arrival at Stax may position her among legends, but she’s well aware that she still has much to do and say.

“To be on the premier soul label is a validation of what I’ve accomplished with my music and what I stand for,” she says. “I’ve always been a champion for this music. This album is my version of soul. It’s my experience of soul. It’s what soul means to me, and I want to share it with you.”