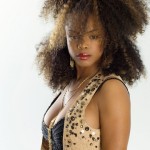 "My Soul" set for release on May 4, 2010 May 25, 2010 Listen to "Tell Me You Love Me" on the player below: Get your own playlist at snapdrive.net! CLICK ON ME TO DOWNLOAD "Tell Me You Love Me" January 25, 2010 -- From the very first track on her 2005 debut album Leela James has captured the gritty, emotion-drenched essence of artists like Aretha Franklin, … END_OF_DOCUMENT_TOKEN_TO_BE_REPLACED

Bronx most fierce female MC, Mala Reignz, is back with the EP "Calm Before the Storm" that was released on January 29, 2010.  I have a thing for badass chicks who have shown they can hold it down, and Mala is no exception.  Standing 4 ft 11 in tall, this tiny Latina will eat you alive and spit out our your bones with her rhymes! I've been routing for Mala since I first heard … END_OF_DOCUMENT_TOKEN_TO_BE_REPLACED