You are here: Home / ifelicious commentary / Jan 29, 2010: Kiss-n-Grind GRAMMY® Edition in LA with live performances by 2010 nominees in the “Urban/Alternative Performance” category 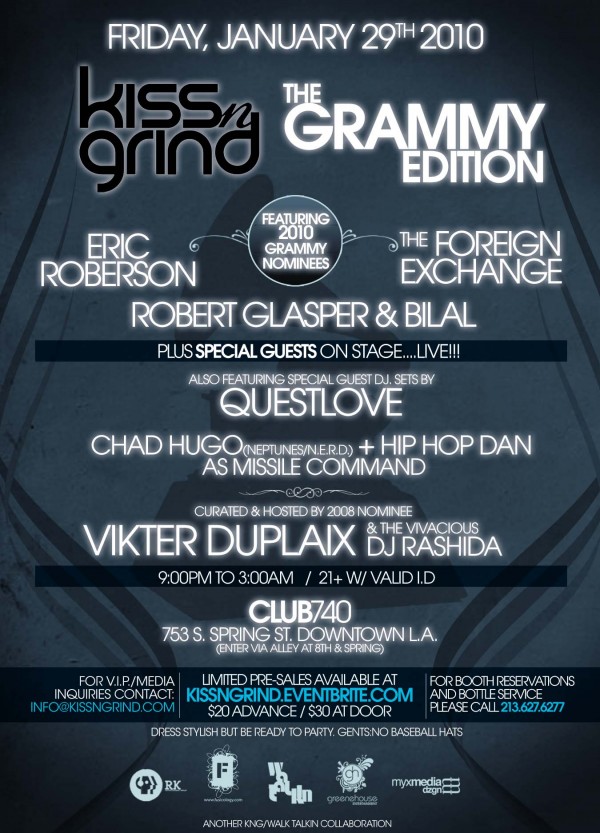 LOS ANGELES, Calif. (Jan. 28, 2010) — Vikter Duplaix, former GRAMMY® nominated artist & current Vice President of the Los Angeles Chapter of The Recording Academy, is joined by previous GRAMMY® winners, Questlove & Chad Hugo (N.E.R.D. / The Neptunes) to provide you with a night full of musical nourishment and healing, as they celebrate the industry’s most exciting “Urban/Alternative” artists during the 2010 GRAMMY® weekend. Live performances by 2010 “Urban/Alternative Performance” category nominees including Eric Roberson, The Foreign Exchange, and Robert Glasper featuring Bilal. Special guest DJ sets by Questlove, Chad Hugo & Hip Hop Dan and DJ Rashida. This Kiss-n-Grind GRAMMY® Edition will take place on Friday, Jan. 29 from 9 p.m. – 3 a.m. PT at Club 740 in Downtown Los Angeles. There are a LIMITED amount of pre-sale tickets to attend the Kiss-n-Grind GRAMMY® Edition, available ONLY at http://kissngrind.eventbrite.com. Once the pre-sale tickets are gone, tickets will ONLY be available the night of the show for $30.

Kiss-n-Grind GRAMMY® Edition is hosted in partnership with SoundExchange and the musicFirst Coalition. As Vice-President of the Los Angeles Chapter of The Recording Academy, Vikter Duplaix has been actively involved in raising awareness for the Performance Rights Act alongside SoundExchange and the musicFirst coalition. Duplaix states, “Kiss-n-Grind GRAMMY Edition is an incredible celebration, but it is important to also be conscious of the needs of others while we enjoy the treasures of our more fortunate lives. I believe that now is time for performers and musicians to be fairly compensated by terrestrial radio for the beautiful sounds they create. What’s fair is only fair.”

Philadelphia born Vikter Duplaix was nominated for a 2008 GRAMMY® Award for the track “Make A Baby” from his third album ‘Bold and Beautiful’ (BBE). Known throughout the world as an ambassador of futuristic sensual sound and seductively smooth vibes, Vikter’s critically acclaimed releases ‘International Affairs’, ‘Prelude to the Future’ and ‘Bold and Beautiful’, have allowed him to tour and experience over 40 countries with his unique combination of lifestyle enhancement and eclectic sound. He is currently at work on his fourth studio album, ‘Love Machine’, slated for release in 2010. A founding member of the Axis Music Group with James Poyser and Chauncey Childs, Duplaix has produced a Who’s Who of R&B superstars including Erykah Badu, Jill Scott, and Earth Wind & Fire, and has done featured vocal spots with Jazzanova, King Britt, Masters at Work, DJ Jazzy Jeff and Roni Size. Duplaix is currently the Vice President of the Los Angeles Chapter of The Recording Academy. www.vikterduplaix.com; www.twitter.com/duplaix.

Kiss-n-Grind is an exclusive monthly event, featuring the industry’s hottest DJs and R&B/Soul recording artists in some of L.A.’s trendiest hotspots. Artists such as Prince, Angie Stone, Eric Benet, Idris Elba, Jody Watley, Sanaa Lathan, Talib Kweli and many others have supported the Kiss-n-Grind experience.

SoundExchange, the non-profit that collects royalties for featured recording artists and copyright owners, congratulates the Grammy nominees and all creators and supporters of music. Their 48,000 members have received $360 million so far from Internet, satellite radio and cable channel digital streams, but you have to be registered to claim your share. So snag a representative tonight or register at www.SoundExchange.com so you can get paid when you get played!

The musicFIRST Coalition is a partnership of artists and organizations in the music community who support compensating performers for their work when it’s played over the air. Corporate Radio has had a free pass for too long. It’s time to level the playing field and promote fairness among all types of radio. www.musicfirstcoalition.org