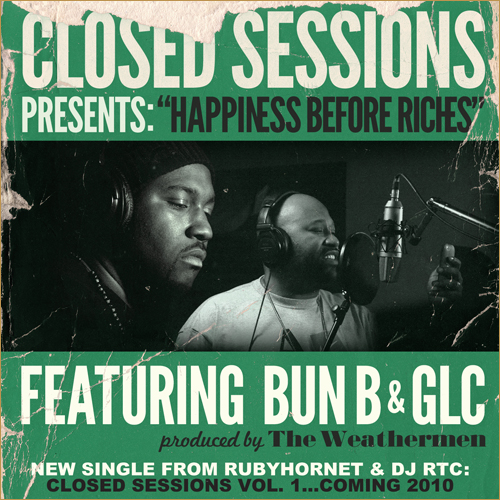 January 27, 2010 — To truly make a mark in the digital age, you have to be ahead of the curve and Chicago’s recently Closed Sessions label may very well be at the forefront of a new movement in the digital music age.  With each of the Closed Sessions founders having years of experience in their respective fields, they combined their expertise in Audio Engineering (Mike Kolar who is chief engineer and owner of Chicago’s SoundScape Studios), Media Technology (Omar Solis) and Viral Media (DJ RTC EIC of Rubyhornet.com and also a renowned DJ who has performed and worked hand in hand with numerous labels and artists) to create a one-stop shop that caters to everything an artist requires to create compelling music.

The premise of Closed Sessions revolves around using their hometown of Chicago as a backdrop to further influence the creative process and experience.  All of the sessions recorded for Closed Sessions: Vol. 1 are recorded organically with artists who were either visiting the city while on-tour, or in a few cases those who already call it home.  Working with a variety of talented producers, Closed Sessions is supplied with with original and high quality production, which is then stored in the catalog at SoundScape Studios.  When a participating artist comes to Chicago, they are taken to SoundScape Studios with RubyHornet.com’s full video team and the studio is equipped and catered to fit their individual needs. Once comfortable, they are able to cycle through the Closed Sessions catalog and pick the beat of their choice.  Once they have chosen their beat, they are left to do what they do—make great music.  Adding to the intrigue, Closed Sessions participants work with other artists and producers that they may have not previously met and may not typically work with, which creates very compelling music.

Each Closed Session is videotaped and photographed, giving fans a candid look into the recording habits of Hip-Hop’s top artists, well as providing them with new and high quality music from their favorite artists. The finished song and video are released virally via RubyHornet.com and reposted throughout the web by other leading music and culture websites.  The songs are released individually, as well as collectively via multi-media EPs that include music, videos, photos, and stories all focusing on the Closed Sessions experience.

The majority of Closed Sessions participating artists are provided with a number of additional experiences including, but not limited to, a concert or party organized in part by RubyHornet, as well as a tour of the city in which artists are taken to various cultural hotspots introduced to Chicago’s industry players and personalities.

Since conducting the first Closed Session with New Orleans’ recording artist Curren$y, artists such as Amanda Diva, Kidz In The Hall, Tanya Morgan, U-N-I, Bun B, Donnis, Rhymefest, Skyzoo, Big Pooh, and many others have participated.  The first Closed Sessions EP, presented and mixed by DJ RTC, will be released in March 2010 and will contain nine songs.  The collection will be distributed digitally as a free download.

While each artist is different and their recording process differs, their individual experiences and testimonials all shed light on how Closed Sessions is poised to brand its name throughout the Urban Music world.

“Going to Chicago is always good…  Seeing GLC in Chicago is even better…Recording in Chicago with GLC and RubyHornet is guaranteed classic!” —-Bun B

“Closed Sessions made sense for me because I always felt like I wanted SoundScape Studios to be the one place that my artist friends could hang out and feel comfortable when in Chicago.  DJ RTC, being my personal friend and Mixtape DJ and Mike Kolar being my engineer made my involvement very logical. Closed Sessions is creating snapshots of some of the great moments in Chicago Hip-Hop through song.” —-Naledge of Kidz In The Hall

“Closed Sessions was THAT SHIT.  I got to meet and build with some really great talent and eat some good ass nachos (haha).  The record turned out crazy and Chicago is a great place to be.  Ruby Hornet is putting together great collaborations, bringing artists together in person the way it should be done – none of that email back and forth shit.”—Emilio Rojas

“I think rubyhornet.com has begun something great with their Closed Session series. A lot of fans want a closer look at their favorite artist and this is a way to let them in on the writing and creative process of creating music. Even the casual listener may gain a greater respect for the process as well as the artist after viewing an episode of Closed Session.” —Big Pooh of Little Brother

“Closed Sessions is like being in the club when it’s poppin’ minus all the hatin’ ass ni***z.”—Rhymefest