You are here: Home / ifelicious music / Wu Tang: Return of the Wu and Friends (mp3 download and video) 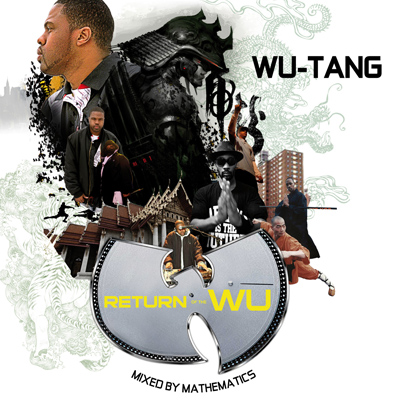 Since their debut album, 1993’s Enter the Wu-Tang (36 Chambers), Wu-Tang has become synonymous with gritty, direct lyrics and beats that draw from classic soul, horn-blasted funk, cinematic curios, and dirty guitar licks (among many others.) With each successive album, the group solidifies their hold on hip-hop, watching over the years as rappers, trends and ephemeral styles come and go and become musical footnotes in the game.

As devoted fans clamor and salivate for anything Wu-related, Gold Dust & Nature Sounds are proud to announce the release of Return of the Wu & Friends, produced and compiled by Wu-Tang Clan producer/DJ Mathematics and including some exclusive tracks, lost gems and old time favorites featuring all nine emcees.

The 16 tracks featured on Return of the Wu & Friends were compiled from songs recorded during the group’s critically acclaimed 2000 album The W through 2008, including exclusive tracks like “Steppin 2 Me” featuring GZA, Inspectah Deck and Masta Killa. The producer also offers a slew of new remixes, including “Respect Mine” and “Clap“. On the former, featuring Raekwon, Method Man and Cappadonna, the sprightly piano loop found on the original (from Mathematics’ 2003 solo album Love, Hell or Right) gets flipped into a slower, more ominous track anchored by a funky slap bass line.

On Return of the Wu & Friends, every member gets their chance to shine, backed by Mathematics‘ acute ability to perfectly match each member’s cadence and tone to the respective beat. Slower, more soulful tracks like “Da Way We Were” and “Strawberries & Cream” are balanced with classic Wu funk like “Iron God Chamber” and “It’s What It Is” (the latter the new superhero anthem for the 21st century.) For anyone fiending for more Wu classics, Return of the Wu & Friends offers up an album’s worth of tracks sure to fill the need for Wu bangers.

Having known the Clan since the mid-80s and produced for them since 1996, Mathematics is no stranger to the group. Starting off as GZA‘s DJ during the emcee’s Cold Chillin’ days, the producer has since gone on to create a diverse and memorable production catalog with the group, contributing tracks to The W and 8 Diagrams, as well as Ghostface Killah‘s Supreme Clientele, GZA‘s Beneath The Surface, Method Man‘s Tical 2000: Judgement Day and Method Man & Redman‘s Blackout!.

For more on Wu Tang’s upcoming album, check out