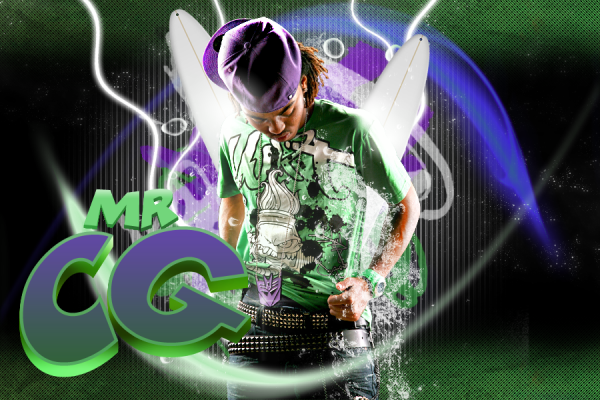 Carbondale, IL — At just 17-years-old, Mr. CG is already a veteran in the music industry. In 2008, Mr. CG teamed with Minneapolis-based label Hudson Records to release “Boogie Board 9000,” followed by a remix featuring California’s New Boyz. Fan-made viral videos for the dance track inundated the net in 2009, and just after completing his own viral video, HiTz Committee Entertainment and Jive Records snapped up the teen to release his solo debut album.

Mr. CG began writing songs, producing, singing and rapping when he was 10-years-old. Encouraged by his parents, the young prodigy found ways to capture the energy of his generation in song. By 2007, CG enjoyed success as a member of the Pop It Off Boyz, with their Hip Hop dance hit “Crank Dat Batman” on Universal Records. The video appeared on BET‘s “106 & Park,” and garnered generous radio play nationwide.

Eager to express himself to the fullest, Mr. CG set out on his own in 2008, and signed on with NBA pro Troy Hudson‘s imprint. They recorded the dance-inspired hit “Boogie Board 9000,” complete with an instructional video from CG. A remix with Warner Bros. duo New Boyz followed, and it was just a matter of time before fans and major labels started taking note.

“Honestly I just want to earn respect,” expresses Mr. CG. “Most of these new people aren’t earning respect. I listen to Miley Cyrus, The Jonas Brothers, Taylor Swift, and all of the pop artists. I would love to work with them. We appeal to a crowd that older people can’t catch – they’re not gonna do it like we gonna do it.”

In November, 2009, Mr. CG solidified the deal for his solo debut with MeMpHiTz at HiTz Committee and Jive Records. They will be filming the official “Boogie Board 9000” video in January 2010 with celebrity dance cameos, and the album is slated for release in Summer 2010.

“Simply put, Mr. CG is the future of Hip Hop,” says MeMpHiTz. “It’s easy to try and write him off until you actually hear his body of work. After my first listen, my reaction was reminiscent to the first time I listened to T-Pain. I was mesmerized, and my doubts were silenced by his artistic talent and breadth of material. I think Mr. CG can comfortably take his own lane and crush the game if all forces necessary are behind him. I sincerely thank Troy Hudson/Hudson Group Entertainment for deciding to bring Mr. CG into business with HiTz Committee Entertainment/Jive Records – I definitely have big plans for Mr. CG.”

For more information on Mr. CG…

Dance crazes, skinny jeans, delicious twists on American slang and colorful accessories are all a part of the new-age influence on today’s popular music. Call it a renaissance if you will, as young people fuse splashes of Hip Hop, rock, punk and pop culture regenerated from the ‘80s and early ‘90s to create their own exciting new scene.

At just 17-years-old, songwriter/producer Mr. CG is creating another part of what will one day be a historic era. His current single “Boogie Board 9000” has fans across the country going wild with their versions of the dance video. Once a member of the Pop It Off Boyz, known for their hit single “Crank Dat Batman,” Mr. CG is no stranger to the spotlight.

As he prepares his solo debut album in conjunction with Hudson Records and Jive Records, the young performer is ready to unleash his futuristic cross-genre style on the world.

By the time he was 10-years-old, the Carbondale, Illinois native was set up with a studio from his encouraging parents. Mr. CG’s cousin helped him get a start on operating the equipment, and his fate was sealed. He began writing songs influenced by a variety of artists, and began to build a sound that he now describes as “a walking MP3 player.”

“I have everything to give to everyone, I can do anything when it comes to music,” CG says confidently. “To describe it in a word, I’m spazzing. My music is just like spazzed out. I travel everywhere and pick up a lot of different styles, then I make up my own style. I would say The Dream, Drake and Michael Jackson have influenced me the most.”

While “Boogie Board 9000” is a certified club hit, Mr. CG will bring a blend of styles to his full-length album. He has a very specific vision, even if he can’t fully convey it just yet. “I’m producing my own stuff for this project, but taking in from other producers as well,” he explains. “When I get in the studio and get ready to make tracks, it’s already there… I can hear it and visualize it before I even get to the studio. So it’s like when I touch the keyboard I already know what’s gonna come out.”

“When I created ‘Boogie Board 9000’, I went down to Atlanta because I wanted to feel the vibe down there,” he continues. “My friends Motion Sickness had a dance called Boogie Board 9000, and I was like ‘I should make a song out of that.’ When I listened to the Atlanta type of rap vibe, and how you could still sing too, I went in the studio and got a beat, put it together and it was real good.

“The follow-up single is called “G Shock” featuring Rich Kids out of Atlanta. They’re signed to T.I.’s Grand Hustle label. It’s a real nice song – it’s pretty different. We’re trying to see if we could set up a deal to promote the G-Shock watches along with the song. I think that would be very great.”

Mr. CG prefers the life of a solo artist over being in a group, and he’s ready to accept responsibility for his work, and for his generation. “Everything changes every day, and Hip-Hop is changing. Everything that’s coming out now represents what us teens do. You’ll see a lot of people coming in real young that can’t rap, produce, sing and do other types of music and make it sound good. I just make everything sound good.”