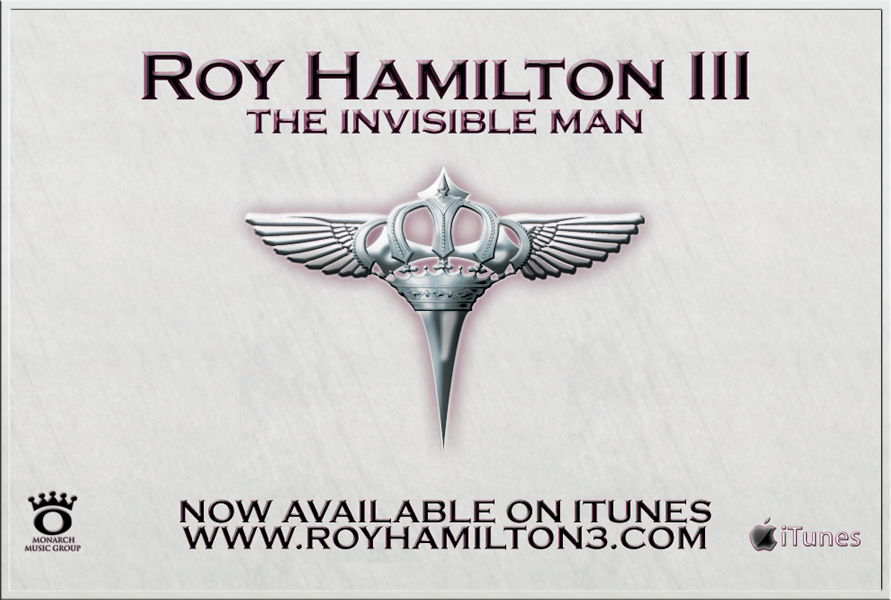 Atlantic City, NJ — Throughout music history, producers and others behind the success of the hit-making process have stepped into the limelight. Likewise, many celebrities have dipped into the shadows of their stardom to hone their business skills. Roy “Royalty” Hamilton III is a rare performer who has both true musicality and business acumen on his side, and he is ready for everything to come full circle in his career.

As he prepares to unleash his debut solo album The Last Monarch/The MA-Day on May 3, 2010, music fans will see how Hamilton fuses multiple abilities as a songwriter, performer, producer, composer, director and businessman.

With an impressive discography of work to his name, the young producer is currently on the Billboard charts with the R. Kelly R&B/Hip Hop Top Ten hit “Number One” featuring Keri Hilson, which Roy co-produced with his brother Raphael “RiffRaff” Hamilton. The song will be featured on R.Kelly’s Untitled album, hitting stores on December 1, 2009. Roy has also just produced a remix to “Number One,” which is available on his official websites.

The first wave of Roy Hamilton III‘s solo music will be exposed through the MA-Day micro-mixtape series, counting down from III (to be released December 1, 2009) to I. Hosted by DJ Whoo Kid and DJ Do-It-All, the micro-mixtapes will spotlight original material from Hamilton’s vast catalogue of music, accompanied by lively videos for each track.

The official first single from The Last Monarch/The MA-Day will be Hamilton’s self-aware anthem “The Invisible Man.” He will also release the online reality series Royality TV, which will take people behind-the-scenes for the process of bringing his talents to the forefront.

Born into a musically involved family in New York and raised in New Jersey, Roy Hamilton III was discovered by R. Kelly when he was just 17-years-old. He went on to work with Teddy Riley, Babyface and other mentors, and has produced songs for the likes of Michael Jackson, Britney Spears, Keith Sweat, Day 26, Nas and more. His earliest work includes Kelly Price‘s #1 R&B remix for “Friend of Mine” featuring R.Kelly and Ronald Isley, and the #1 Pop hit “Stutter” for Joe. He also served as the band director for two Cheetah Girls tours.

By the time he was 24, Roy was appointed as Director of A&R for Capitol Records, the youngest African-American ever to take the position. During his tenure, Hamilton helped to develop projects for LeToya Luckett, MIMS, J. Holiday, Chingy and more.

A key element that keeps Roy Hamilton III fresh on the corporate side of music is an open attitude about technology. “I’m very in line with what’s going on in terms of the transition from physical to digital music distribution,” he asserts. “I have something I’m working on right now which I think will be one of the main driving forces as far as how music is delivered. I’m a man of the people, so I’ve been listening to what my non-industry friends have to say, and I’ve been listening to those in the music business complain about how they’re losing their jobs. I think I’m going to help be the balance.”

Hamilton’s confidence is not without merit, and his tangible passion for music is infectious. “It’s beyond me, but I’ve been lined up for this moment for years,” he explains. “I feel like it’s been carved out for me to become an executive and have number one songs to my credit, and to have worked with all of these amazing producers and business people who have mentored me. Now I’m pretty much just a super artist. I know what I want, and I’m comfortable in my skin. I’ve watched a lot of artists make mistakes… I’m still a student of the game, but I’m going for my Masters right now.”

For more information on Roy Hamilton III, go to http://www.tygereye.net/royhamilton and http://royhamilton3.com

Some of the most dynamic change in the world is sparked by the simplest of ideas. At just 29-years-old, Roy “Royalty” Hamilton III is already an industry vet with over a decade of musical hits, power moves and executive decisions under his belt. As a producer, songwriter, composer, performer, director and consummate business man, Hamilton is ready to unleash his own brand of empowerment through music.

Hamilton will release the single “The Invisible Man” for the new year, followed by his debut solo album The Last Monarch/The MA-Day on May 3, 2010. Recently, Roy’s production hit the Billboard Top 10 again with R. Kelly’s single “Number One” featuring Keri Hilson, and the track will appear on Kelly’s upcoming Untitled album due out in December.

Currently Roy is preparing MA-Day III “micro-mixtape” for release in November, which will be accompanied by exclusive videos for each of the four original songs, and two more micro-mixtapes counting down to his official album release. As the official first single “The Invisible Man” hits airwaves in January 2010, Roy will unveil his Royality TV series online, showcasing in-studio surprise guests and special behind-the-scenes features from his incredible journey to the album debut.

From childhood, New York-born, New Jersey-raised Roy Hamilton III possessed inspiration and innate ambition that grew into a multitude of ideas for the future. Taking inspiration from his Jamaican heritage and upbringing immersed in American Pop culture, Hamilton made his own lane. His vision evolved into an obsession to make a difference with the next generation of music hopefuls in his region, and ultimately the world at large.

Great change may seem like a lofty goal in the aftermath of the tattered music industry and the all-around lack of musical appreciation in today’s society, however Roy is confident in his ability to revitalize the passion.

“I feel like my life itself gave me an advantage since birth,” explains Roy. “My grandfather, Roy Hamilton, was a renowned star in his day. Growing up, my parents kept me around music, and my father’s Godfather is BB King. When I turned 16, I started performing locally in the Atlantic City area, then I met R. Kelly at 17. So it’s just like my steps have been in order, kind of a divine order, and I can’t even say how.”

The character of a true leader can only be improved by mentorship, and Roy’s journey has been rich with amazing teachers. The versatile young artist and entrepreneur credits R. Kelly and former Capitol Records CEO Andy Slater as major influences on his career.

“R.Kelly has been in my life over the last decade or so, as not only an inspiration but as a teacher,” says Roy. “He hasn’t been shy or stingy about what he knows and sharing it with me. Having access to a genius like him really helped me out a lot along the way. I worked under Andy Slater at Capitol Records from 2004-2007, he was the president and CEO at the time. He developed and managed Fiona Apple and Macy Gray, and he was the manager of the Beastie Boys for a long time. He brought me in because he saw my knack for finding talent and being able to cultivate it and bring it to a level of excellence.”

Prior to his days in the office, Roy’s production included work on albums for the likes of N’Sync, Britney Spears, Nas, Michael Jackson, Samantha Mumba and Keith Sweat. He produced the #1 hits “Stutter” for Joe (Pop) and “Liar” for Profyle (R&B), as well as Top 20 hits “Friend of Mine (Rmx)” for Kelly Price and “Wanna Do You Right” for K-Ci and JoJo. During his tenure at Capitol Records, Roy helped to develop projects for LeToya Luckett, Chingy, MIMS, J. Holiday and more. Additionally, he served as the Musical Director on two tours for The Cheetah Girls (’06-’07).

Roy’s upcoming production for 2010 includes tracks for Pleasure P, Kristinia DeBarge and Pop princess JoJo. As he embarks upon his solo career, Roy Hamilton III feels that his mission is clear, and he is prepared for the long haul. Positive, opinionated and passionate, he does not see obstacles, only opportunities.

“As a part of my mission statement, I believe it’s time for things to be illuminated. I think music is in a dark place, with people compromising anything for a dollar. I’ve always been blessed enough not to have to do that, and it’s been tough for me to figure out how to stay relevant and still keep my morals intact. I don’t believe in doing stuff just to be doing it, so people should know what they’re going to be hearing from me. I don’t curse in my music, and future productions will all be consistent with this same mission statement. ‘The Invisible Man‘ is my testimony.”

Contributions to Full Lengths and Compilations