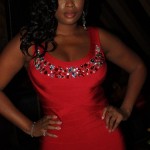 (New York, NY:  October 20, 2009)  Celebrities and athletes came out to the Big Apple to celebrate at the Liris Crosse Birthday Celebration hosted by Paul Pierce and the Boston Celtics sponsored by Hennessey Black on Monday, October 19, 2009 at Marquee in the fashionable meatpacking district in New York City. Model/Actress Liris Crosse arrived at Marquee shortly after … END_OF_DOCUMENT_TOKEN_TO_BE_REPLACED

First of all, I don't what the show's ratings have been, but I'm surprised to see it go on to a second season.  I like Whitney, but she's boring to watch on tv as a featured "actress."  Olivia kept the show going last season and she's back now working for Elle magazine while Whitney works part-time at her old haunt People's Revolution and is starting her own clothing line … END_OF_DOCUMENT_TOKEN_TO_BE_REPLACED