You are here: Home / film, documentary, theater, arts / LeBron James: “More Than a Game” is more than a basketball movie 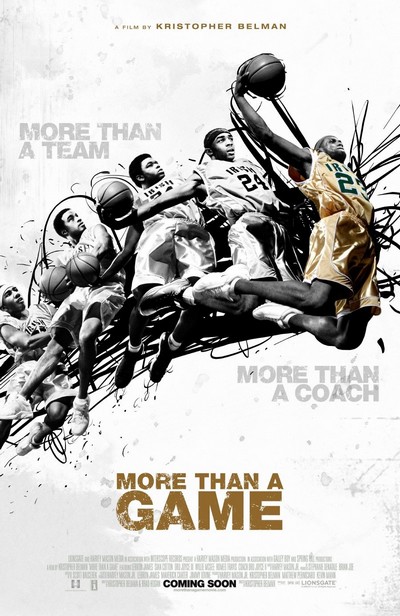 I poke fun at the midwest after landing here several years ago, but I have to say that I’ve become a Cavs fan and LeBron James fan as the result of living in Ohio.  Now before you guys start commenting with stats and stuff, my fanaticism is to a certain extent.  I’ll enjoy a game here and there and follow the main headlines…and watch LeBron’s butt.  😎

In any case, it was news to me to read an email about a documentary “More Than a Game” that was released in select theaters (New York and Los Angeles) October 2, 2009.  The documentary follows LeBron and basketball friends from Akron, Ohio who became known as the “Fab Five” in their high school years and is directed by Akron native Kristopher Belman.

Director Kristopher Belman was a film student at Loyola Marymount University when he persuaded the media-swarmed St. Vincent/St. Mary’s basketball players to let him follow them around the country in their quest for a national championship. (source: San Francisco Chronicle)

I’m disappointed to see a film about LeBron not have any showings in Ohio.  I need to call him up and fix that.  LOL!

…has some rare footage online as well as the official music video for the film by Mary J. Blige.  Go to http://www.statefarm.com/lebron/ and browse around.  More clips are likely to be released in upcoming weeks.

Below is a 7 minute trailer that I found on YouTube…

It’s a starting place for so many players around the world. Before he was an icon, LeBron James was a tall kid from Akron, Ohio who, along with his crew of friends, loved to play basketball. But his story was different.

More Than a Game is a documentary about Lebron, a legend in the making who truly believed that no one can do it alone. A young superstar that never let his destiny as one of the game’s greatest get in the way of the things that really matter: loyalty and a brotherhood that outlasts fame and fortune.

Created by first-time director Kris Belman, More Than a Game tells a story that all ballers can identify with, the dedication, the passion and the teamwork that went into making LeBron and his St. Vincent – St. Mary squad champions. As a college student in Akron, Belman heard about the team’s story while taking a documentary film class. Originally intended to be a short project, the story seemed so much larger, and with the help of the team’s coach Dru Joyce, he followed the boys during their journey to the 2003 state championship.

The documentary premiered recently at the Toronto Film Festival to a standing ovation. With plans of a national release in 2009, More Than a Game is said to be an inspiration for all basketball lovers around the globe.

Interview with LeBron on MTV…