This summer fans judged eight different regional competitions on OurStage to help MTV select the nominees for local VMAs for Best Breakout Artist! The contest gave several talented emerging artists the chance to open for big name acts such as All Time Low and White Tie Affair while being judged by influential industry leaders. The New York City competitors battled it out in front of top MTV VMA talent at a Time Warner Cable MTV VMA weekend pre-party. During the live VMAs the winners were broadcasted in their regional markets and announced as the official VMA Best Breakout winners of their city! Congratulations to all the 2009 local VMA Best Breakout winners from OurStage and thanks to all the fans who voted in one of our most successful contests to date! (source: OurStage.com) 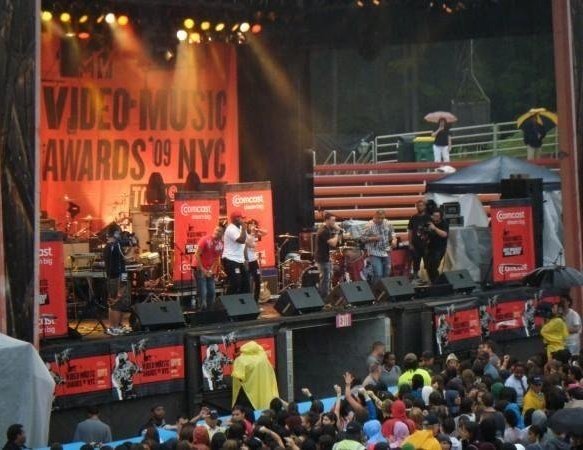 While they weren’t invited to attend the MTV VMAs (Boooo MTV! that was a punk ass move), DaCav5 was featured in a short commercial in Comcast’s viewing area during the VMAs showing them being announced as the winner. If you missed it, check it out below.

Tune into MTV2 this coming Sunday, September 20, 2009 for Sucker Free Countdown (official site www.mtv.com/shows/sucker_free/series.jhtml) to watch DaCav5 in concert.  I checked the site and it airs at 7:00am (click –> MTV2 schedule 9/20/2009).  For you folks that aren’t early risers on Sunday mornings, set your DVR so you don’t miss out!