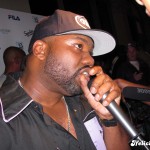 That's right!  Your girl Ifelicious was on the scene at Santos Party House in New York City for Wu-Tang Clan member Raekwon's "Only Built for Cuban Linx, Vol. 2" album release party hosted by Diddy.  The press list was extremely tight and I lost my official access to get in the party, but you know how I do...I got myself in anyway!!! 8-) I was THE ONLY small media … END_OF_DOCUMENT_TOKEN_TO_BE_REPLACED