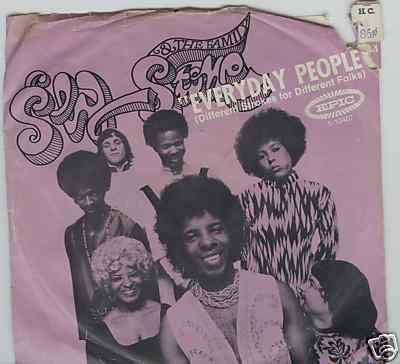 I wanted to go back a little further this week and tap a 60s classic.  Sly and the Family Stone‘s “Everyday People” became an anthem for so many things over the decades especially when it comes to equality and civil rights related to ethnicity, sexuality, and religion just to name a few.  Penned by no other that Sylvester “Sly” Stone (real last name for his family was Stewart), I wonder if he knew the combination of words and the band’s delivery of “Everyday People” would catapult the song to number 1 across pop and R&B charts in 1968.  That accomplishment in itself only made sense for a group that was highly integrated with women and men, black and white at a time when our nation was trying to sort through civil rights and equality.  I wasn’t quite born yet when this song first came out but I feel like a lot of my early influences reflected the fact that my parents were in their teens and early twenties during the 60s.  I think it might be like children born now that we have our nation’s first black president (bi-racial for all you people who will get hung up on that one fact out of this entire post).  My dad, a child from the West Indies whose family scraped together the few pennies they had to migrate to America, the land of opportunity.  My mom, a San Francisco bay area baby who landed on the east coast but still maintained a lot of her laid back Berkeley-esque hippie influences.  Somehow they managed to make their way to Michael Rouse inspired utopian suburb of Columbia, Maryland in the mid-seventies.  What a journey in those few sentences alone!  Talk about Everyday People.

I saw several video performances of Sly and decided on 2 of them.  The first one has kind of a video music feel to it and starts out with Sly driving the crew around in a dune buggy (actually song starts playing about 30 seconds in). The second one is a funny and sad reflection of Sly and the Family Stone at a performance where Sly seems a bit (ok a lot) high, but he still pulls off a performance in the end.

This one is from a December 17, 1976 show “Midnight Special” with the also legendary Tom Jones. Looks like Sly can barely stay on his feet.

I found that About.com had a good write up about the band including a little known fact that Sly got his name from a spelling bee in elementary school when he real name “Sylvester” was mispronounced.

Also, read the bio from the Rock and Roll Hall of Fame and Museum where the band was inducted in 1993.

Check out more of my Throwback Friday posts…