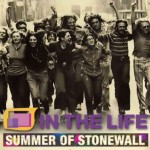 This July, IN THE LIFE is proud to present part II of its Summer of Stonewall series celebrating the 40th anniversary of The Stonewall Riots, “Civil Disobedience.” We don’t know for sure what happened when police officers raided the Stonewall Inn. What is known is that on that historic night, when LGBT patrons united to fight back against harassment and brutality, a … END_OF_DOCUMENT_TOKEN_TO_BE_REPLACED