You are here: Home / ifelicious music / Throwback Fridays (music) / THROWBACK FRIDAY- The Jets “Crush On You” 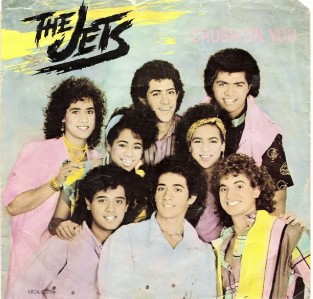 These are my good ole days.  When you could hear a song, feel good, and not have every detail explicitly described in the lyrics.  There were to video hoes (vixens…whatever).  It was that 80s pop, big hair, clothes from Units (remember that store?), shoulder pads, etc.

The Jets were no exception.  At the itme, we thought of them as the new Jackson 5, and yet another example of my mother’s disappointment that she gave birth to 5 children that could not seem to assemble themselves musically. 🙄

Who are the Jets you ask? The Jets are a musical family group from the Tongan Islands who were “stranded” in Minneapolis while touring when a Hawaiian hotel they worked for went suddenly bankrupt. During one of the performances, sitting in the audience was Don Powell. Don Powell had been involved with such greats as Stevie Wonder and was a staple in the Minneapolis Funk Scene. Don took the group under his wing, financed a demo and lo and behold, a record contract with MCA Records launched their careers.

They are comprised of brothers and sisters of the Wolfgramm Family. The original group was 8 brothers and sisters, Leroy, Eddie, Eugene, Haini, Rudy, Kathi, Elizabeth and Moana. The Wolfgramm family has 17 children so it was joked that “If one leaves, there is another Jet just waiting in the wings” as is the case today. It was a family affair as their parents were involved in every aspect of their careers and often would tour with their little brothers, sisters and cousins watching from the sidelines. They often credit their faith as being one of the things that helps hold everything together as they are a strong Latter Day Saint Family (LDS or Mormon).

The family group had performed their act under such names as the Polynesian Pearls and Quasar until they decided on the catchy name “THE JETS”. Many think it’s from the tune “Benny & The Jets”, others think the name is from “West Side Story”.

The Jets rocketed to stardom in the mid to late 80’s with such hits as “Make It Real”, “Rocket 2 U” “Cross My Broken Heart” and the hit that started the public’s attention “Crush On You”. They had 8 top 10 hits, along with 6 albums to their credit. “You Got It All” was a ballad that caught the publics attention with the depth of young Elizabeth’s voice, and “Private Number” caught onto the club scene with its catchy remixes. The Jets were featured on soundtracks such as Beverly Cops II, Burglar and even Karate Kid III.

“Crush On You” was the second single released from their self titled album and made it to #3 on the pop charts in the US according to Wikipedia.com.

Break out your 80s gear, dust off your dance moves, and enjoy a round of The Jets single released in 1985 “Crush On You.”