You are here: Home / ifelicious commentary / Puppy rescued after being flushed down toilet, renamed Dyno. 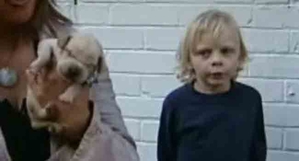 I couldn’t believe this story when I just heard it on the news.

Below reposted from NZ Herald News…

LONDON – A British pup had a narrow flush with disaster after his 4-year-old master decided to give him a bath in the toilet.

Daniel Blair was quoted as telling Britain’s Daily Mirror tabloid that he tried to clean the muddy one-week-old cocker spaniel because he was muddy, and he flushed him down the drain.

His mother Alison was quoted as saying she thought the dog was dead, but a drainage firm was able to locate the beleaguered animal in a pipe 18 metres away from the house using specialist camera gear.

Pictures of the wet, frightened-looking puppy trapped in a pipe were posted to the firm Dyno-Rod’s website and broadcast on British television yesterday.

The company says the dog is now fine.