You are here: Home / ifelicious tv / Keshia Knight Pulliam is the saving grace for Tyler Perry’s “House of Payne” 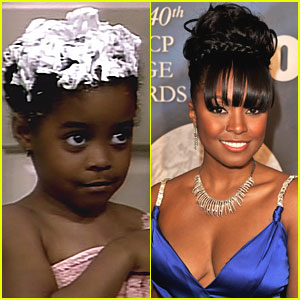 That’s right, folks.  That sweet little gal that won our hearts in her role as “Rudy Huxtable” on the classic hit tv sitcom “The Cosby Show” is all grown up. (On a side note, the cast from “The Cosby Show” recently reunited for their 25th anniversary.)  Can you believe it?!?   Miss Keshia Knight Pulliam is college educated at the prestigious all womens HBCU (Historically Black Colleges and Universities) Spellman College in Atlanta, Georgia, and back in her natural calling as an actor.  I assume being in the ATL scene led Tyler Perry to scoop Keshia up for various roles in his movies and lately in his TBS tv sitcom series “House of Payne.”

Miranda Lucas-Payne (Keshia Knight Pulliam) is Calvin’s girlfriend-turned-wife. She was first introduced in the 1st season as a sexy con artist who stole all of Calvin and Curtis’ money for an art gallery. The character returned eventually, but what she did to Calvin and Curtis is only mentioned every so often but is very brief. In the conclusion to Season 4, she married Calvin. Miranda has a nephew that was very troubled that didn’t listen to anything Calvin told him (He even was ordering Calvin around) when he was keeping him. She and Calvin began to have problems in season 5. She is the stepmother of C.J. “Calvin Junior” and is expecting as well. She wants to be separated from Calvin.

Well, I have to say that Keshia’s character “Miranda” has developed into critical role that I think saves the show.  She reminds me of Gabrielle Union and Tasha Smith in her ability to bring that chillingly believable drama to the screen.

Tyler Perry has kind of a cult following, and I don’t think I would watch “House of Payne” if I hadn’t grown to love the actors from the Tyler Perry plays that have made their way into his movies and tv shows.  In any case, I was about to give up on the show before Keshia really surfaced this last season as Calvin’s (Lance Gross) now wife.  Their marriage is on the rocks, but I swear if Keshia wasn’t playing “Miranda” the drama would not play out half as well.  If you haven’t been watching this season, catch up, and see what I’m talking about.  Also, just for kicks, scoop up the Tyler Perry plays.  You’ll either love them or hate them.  I’m partial to his plays over his movies and even his tv shows…although giving Mr. Brown (comedian David Mann) his own show “Meet the Browns” (also on TBS) was inevitable.  He is absolutely the funniest guy in Tyler’s camp.

Keshia’s also slated for a reality tv series on Oxygen about being young and rich. The Associated Press reports that Knight-Pulliam, along with her live-in boyfriend, Kaseem Penn, will star in “Keshia and Kaseem”…The news agency describes the show as giving the audience an idea of what it’s like to be “young, rich, single and co-habitating.” Penn is an Atlanta area entrepreneur, according to the AP. (source:  IMDB)  The show will debut this Fall. (source:  Hip Hop Crunch)