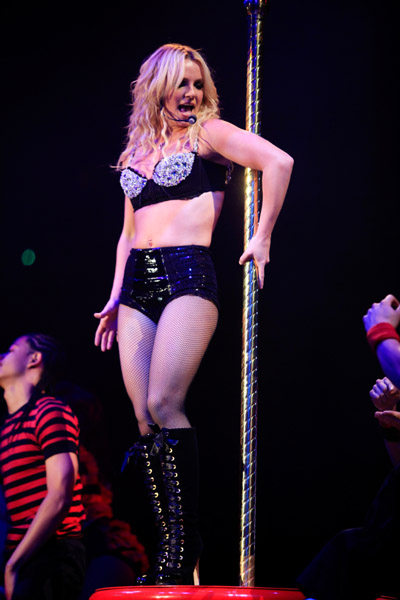 I am admittedly a Britney Spears hater.  I just can’t help it, and she makes it so easy.  Yes, I do own some of her music, and yes, I do like some of her songs, too.  For me, this goes all the way back to when they kept pinning Britney up against Christina Aguilera.  Christina wins hands down from vocals to performance.  Now that I’ve seen both of them in concert, I feel confident in my point of view.

At the same time, I’m glued to whatever Britney’s doing just to see if I can be persuaded to think otherwise.  Kind of like how we rooted for Michael Jackson for a while (I think that time has come and gone), we kind of want Britney to snap out of it and come join us back in reality.  Her “Circus” album is very reminiscent to me of what Michael Jackson did with his “Dangerous” album.  The same carnival theme with songs taking jabs back at everyone who took jabs at him.  I totally get it for both of them.  What Michael has over Britney is star power and more talent.  Album to album (“Circus” to “Dangerous”), Michael wins hands down.  There’s more depth in his lyrics, vocals, and beats.  Britney’s “Circus” album makes a good dance album which is really what she’s about anyway.

As soon as I saw that Britney was coming through Columbus, Ohio with her Circus album tour, I knew I’d want to see her.  Regardless of talent, I felt that she would give a good show.  Plus, I called it “market research” for my writing.  😉

With that said, I forked over something like $130 for good Level 1 seats at The Schottenstein Center (aka “The Schott” aka “Value City Arena”) which is on OSU’s campus.  It’s the same venue that Justin Timberlake performed at when he toured through here.  When you start paying into the 100s to see a show, I’m expecting to see an all around performance.  Unfortunately, I don’t feel Britney Spears lived up to that expectation.  I don’t know how else to effectively capture my critique other than to make a list of my thoughts/observations.  I’ll start with Britney since she was the headliner act, but I’ll put some comments about the Pussycat Dolls who opened for Britney at the end of this post.

What I liked about Britney’s performance…

After all, I should start on a positive note, right?

+ Her dancers are off da chain!  They can really dance and were very well choreographed.  They were certainly the work horses of the show that fought to make up for Britney’s shortcomings (oops, got a little negative, sorry.).

+ The various circus performers also were very talented and added visual interest to her show.

+ Britney’s performance of “Everytime” with her perched on the handle of a giant umbrella about midway through the show was very classy.  The song is very soft and Britney “performed” (you’ll have to see my negative comments to know why I put that in quotes) it very well.

+ The special effects were pretty cool.  Loved the ending after the “encore.”

– She lip synced the entire show!!!  That was by far the biggest disappointment.  Her fans should be screaming for their money back.  If you are a singer, then I expect you to sing when I see you perform.

– She went off stage after nearly every song.  I actually began to question whether Britney was fit enough to be on a tour or if it was her diva-ness showing because she wasn’t changing her wardrobe most of the time.

– I felt she’s still not connecting with her audience.  The whole circus concept seems to say, “Here’s what you think of me, so I’m going to give you what you expect.”  It was a lot of smoke and mirrors to me.  Way too much time spent with various circus side acts.  I came to see Britney, not jugglers.  If I wanted a real circus, I’d pay to see Cirque de Soleil.

– I don’t judge by this personally, but I know that Hollywood does.  Britney is chunky by Hollywood standards.  She definitely has some love handles and a little belly pudge.  I know there were rumors circulating that she’s pregnant.  I don’t know if I’d say that was obvious.  She looked like a generally tone, average American.

– She didn’t move onstage which either means she can’t dance or isn’t fit enough to dance an entire performance.  A lot of her time was spent sitting and laying in suggestive poses on various pieces of furniture while her dancers really were the ones who made the performance.

I’m sure I could pick at the show more, but you get my point. 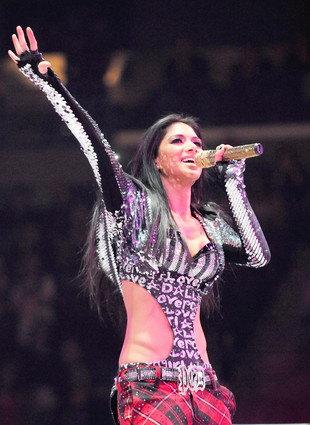 The Pussycat Dolls, on the other hand, were very good.  Everyone was on their feet for their entire show.  When are they doing their own tour?