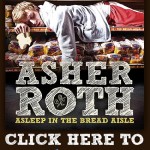 The Asher Roth buzz hits a new high, in some ways literally, with the release of his new album Asleep in the Bread Aisle. Here's a promo clip from Asher Roth that I found on The Daily Kush. Find more videos like this on The Daily Kush The following clips are from Digiwaxx Part 1- Speaking on the comparison to Eminem... Part 2- Asher Roth introduces his … END_OF_DOCUMENT_TOKEN_TO_BE_REPLACED