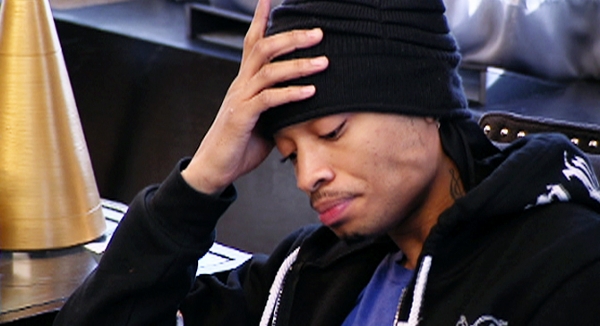 My, my, my!  Those of us watching MTV’s Making The Band 4 (Season 3) have been forced to accept the conclusion that Danity Kane as we knew it is over, and beginning to believe in what Diddy‘s been calling the “Making The Band” curse as we’ve watched the guys from Day 26 unravel from stresses of contract negotiations, recording their sophomore album, and maturing as a group.  Not to mention sweet little Donnie and his own struggles to really breakthrough as the superstar solo artist we all see in him.

However, Que has been front and center of the drama in the past 2 episodes and really since the season started.  Paranoia has set in, for whatever reason (substance abuse or just mental health or a little of both), and really took a stronghold on Que lately.  Maybe we’re a little manipulated by some good editing, too.  Until my last job where I was in a male dominated, blue collar environment, I really believed that certain types of drama were specific to women (typically).  Men can get catty, too!  They definitely need Midol for men.  😉

My hubby and I “fought” over the fight that broke out between Brian and Que 2 episodes ago.  In a way, while I’m not a proponent of violence, I feel like Que had it coming.  My hubby felt that Day 26 shouldn’t have played into Que’s drama so much.  This week, I think I came around to his point of view as I saw Dawn holding it down for the strong, black women and setting things straight.  Que was clearly pushing buttons then crying wolf and eventually all the guys were getting sucked into Que’s matrix.  Fists thrown, tears shed, voices shouted, and it seemed no resolution was in sight.  Finally, daddy Diddy stepped in and took away Que’s privileges by putting him on a little time out.

Diddy’s protecting his brand as he likes to say, which is true.  Day 26’s album is already recorded and days away from release, this season of MTB4 is already recorded, the Imma Put It On You single is out along with the video, and Diddy needs to do a little damage control so we run around like puppets and buy their album.

So what do you think??

Is Que’s future with Day 26 in jeopardy?

Was Dawn right to step in?  How about her timing- sooner, later, or never?

Do you plan to buy Day 26’s sophomore album?

Do you think Day 26, with or without Que, has longevity as a group?