I’ve been meaning to post about this song Right Round for a while.  I mean it when I say Flo Rida struck pop gold with this remake.  The original Right Round by Dead or Alive is what I consider one of those overplayed dance tunes that show up in clubs with whack DJs.

As they say on American Idol, “you made it your own.”  Smart move from Flo Rida’s camp.  I’m loving the integration of female vocals from Kesha.  I don’t know her, at least I don’t think I do, but she’s definitely made a name for herself by swinging in on Flo Rida’s coattails.

The success of this single alone, has media and music world buzzing.  I’m chuckling to myself that I’m including a CNN interview as a link, an odd couple of sorts.

Somebody’s high fiving all the way to the bank.  I wonder what the members from 80s group Dead or Alive are saying.

I’m not the type who would typically buy/download a Flo Rida album, but I’m wanting to at least check out the rest of his sophomore album entitled R.O.O.T.S. 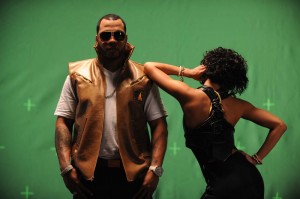 What do you think about the success of this single?

Have you listened to Flo Rida’s new album, R.O.O.T.S.?  What do you think?