You are here: Home / ifelicious tv / In The Life / April 2009 episode of IN THE LIFE title “Revising Gender”

As a heterosexual, married woman, I was at first reluctant to take on this partnership with IN THE LIFE.  This is my second month reviewing the show, and my hope is that we can begin to break down some barriers through open, respectful, and insightful discussions.  As the saying goes ‘we fear what we don’t understand’ I encourage all of my readers to engage in this monthly dialog.  I’m open to feedback and have some ideas on how to develop this further such as through on the street reporting. 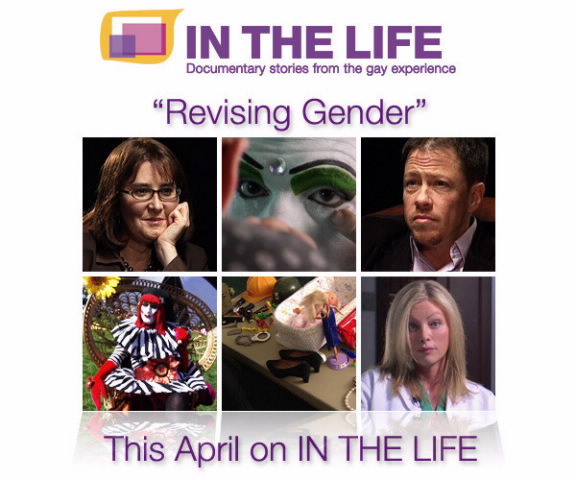 This Month, IN THE LIFE reports on the growing movement for transgender civil-rights in our hospitals, courthouses and on the streets. “Looking Back, Pushing Forward” examines the controversy raging over the inclusion of Gender Identity Disorder in the American Psychiatric Association’s Diagnostic and Statistical Manual. In our A Conversation With…, National Center for Transgender Equality Executive Director Mara Keisling and political theorist, Paisley Currah, discuss legislation designed to protect trans-people from discrimination at work and in gender-specific public spaces. We conclude with a profile of The Sisters of Perpetual Indulgence, a global collective of queer performance artists who defy expectation using the power of parody to promote human rights, respect for diversity, and spiritual enlightenment.

The American Psychiatric Association’s Diagnostic and Statistical Manual (DSM) – the “bible” of mental illness – is currently being reviewed in preparation for its fifth release. Among its nearly 300 entries is Gender Identity Disorder (GID), a diagnosis applied to every transgender person who enters the healthcare system. Because GID pathologizes the identity of those diagnosed, many gender nonconforming children are subject to so-called “reparative” therapies by parents and mental health professionals that regard adult transexuality or homosexuality as a “bad outcome.” But transgender adults are as reliant on GID as they are stigmatized by it, because the American healthcare system requires the diagnosis before a doctor will prescribe hormones, or perform sex-reassignment-surgery. Adding insult to injury, no private insurer will cover trans-specific healthcare needs, even with a diagnosis. The intersection of institutional and parental authority, healthcare policy, and the adult desire to live in a body that matches one’s identity has sparked a wide-ranging controversy. IN THE LIFE looks at the battles being waged within the psychiatric and transgender communities over whether to reform or eliminate GID as a diagnosis, and the implications for transgender healthcare.

A CONVERSATION WITH… Mara Kiesling and Paisley Currah

Mara Keisling, Executive Director of the National Center for Transgender Equality, and political theorist, Paisley Currah, discuss the future of the Employment Non-Discrimination Act (ENDA), and how legislation designed to protect trans-people from discrimination in public spaces, such as restrooms, is currently under attack from the religious right.

THE SISTERS OF PERPETUAL INDULGENCE

Since their first appearance in San Francisco on Easter Sunday in 1979, The Sisters of Perpetual Indulgence have used the power of parody to expose the forces of bigotry, complacency, and guilt. Today, The Sisters are a global collective of queer performance artists devoted to promoting human rights, respect for diversity, and spiritual enlightenment. An Order of many faiths and spiritual beliefs, The Sisters are unified by an irreverent wit and a dedication to “promulgating universal joy.”

For more episodes of In The Life click HERE.