You are here: Home / ifelicious tv / In The Life / March 2009- In The Life episode “Women Through The Lens” 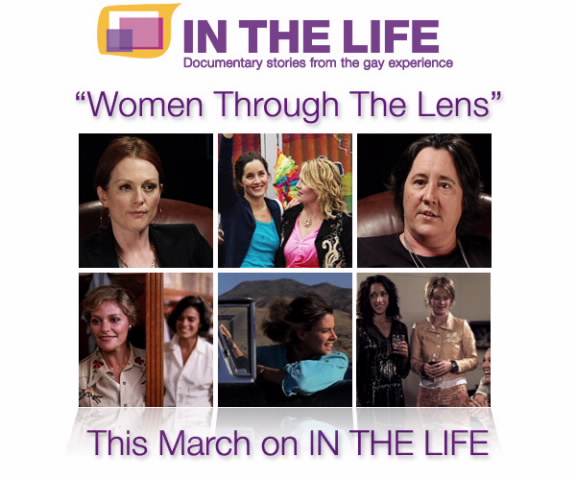 I’m new to learning of this show’s existence, but In The Life has been on the air for a long time.  It’s a monthly show that covers various topics relevant to the LGBT community and airs on select PBS stations nationwide (see the upper right corner of their homepage- http://www.inthelifetv.org/ and enter your zip code to find out if it airs on a station in your town).  You can also watch episodes online (http://www.inthelifetv.org/html/watchitl.shtml) or download as a podcast.

I’m sort of testing the waters with this first post to see if and how you’ll respond, regardless of sexual orientation, and perhaps develop an ongoing monthly forum to discuss the show. I encourage you to comment with your thoughts and share your ideas/suggestions by using my CONTACT ME CONTACT ME page or by leaving a comment within one of these posts.

This month’s IN THE LIFE commemorates Women’s History Month by focusing its lens on popular representations of LGBT women in television and cinema, highlighting the stories and the collaborations behind them.

Legacy of “The L Word”

The first segment of March 2009’s In The Life discussed the now ended Showtime series The L Word and its resulting impact on mass audiences through a show with an all lesbian cast.  Commentary from the show’s executive producer Ilene Chaiken as well as many beloved cast members weigh in with their perspectives of the show’s impact.

Through the course of six seasons, The L Word joined the ranks of classic series like Sex and the City, Friends, and Living Single.  Those of us who watched the show, were drawn to it for different reasons.  My husband, very much a man’s man (yet open minded), typified the guy that was drawn to sexiness of hot women having cat fights and making love.  That viewpoint always bothers me because I feel like it’s another Hollywood objectification of women.  At the same time, it gets ratings and $$$.

I was not instantly hooked on The L Word.  I am not someone who likes any show where sex is central to the storyline, and I don’t tend to talk about sex openly amongst my friends either (case and point, my interview with erotica noir novelist Mozét – http://ifelicious.com/?p=1098 was something I long debated before deciding to conduct and publish).  I also hated that my husband watched the show “licking his chops” (I’m being extreme) so I tended to leave the room when the show came on.  However, when tennis star Dana (Erin Daniels) is diagnosed with and dies from breast cancer in Season 3, I began to see the show as something more.

Eventually, I grew to love and hate the characters as I did with any show.  My goodness, Alice (Leisha Hailey), is so chatty and annoying and does it oh so well.  Shane (Katherine Moenning) played her role as the sexy womanizer so well that I, too, found her sexy.  She’s probably the only woman on that show that I felt an attraction.  Then there was THE Foxy Brown, Pam Grier, of 70s iconic fame on the show as Kit.  Not to mention 80s icon with leg warmers and a dream from Flashdance, Jennifer Beals as Bette.

So what exactly led me to embrace the show?

I think it was a matter of shedding my own insecurities and societal baggage that allowed me to appreciate the show.  I relate to Leisha Hailey’s story of a woman who walked up to her and whispered that she loved the show as if she wasn’t allowed to openly declare that in front of her boyfriend.   Would liking the show mean that I’m really a lesbian?  Where does this fit within my belief system, or more honestly, why doesn’t this fit within my belief system per the way I was raised?

Overly Hollywood, too lipstick or not, mission accomplished by my own testimonial and I’m sure many of yours.  We fear what we don’t know.  The L Word increased awareness and acceptance of being a lesbian to a broad audience.  Whether it’s a realistic portrayal or not can be said for just about anything we see in Hollywood.  From my perspective as a woman, it was nice  to see a show all about women have depth and be entertaining without a man influencing the storyline.  That’s just powerful.

What’s next now that The L Word series has ended?

Lesbian representation, homophobia in Hollywood, and state of queer cinema

The second segment was a two-way dialog/interview between actress Julianne Moore and independent film company Killer Films co-founder and producer Christine Vachon.  The two of them have worked together in the past on films like Safe, Far from Heaven, and Savage Grace.  I have not seen any of these movies so my time was spent jotting their names down to research and add to my netflix list.

As this section’s title suggests, Moore and Vachon talk through various issues regarding the potential for seeing the lesbian protagonist in a mainstream Hollywood film, whether Hollywood at its core is still homophobic, and the state of queer cinema today.

For me, this was an opportunity for me to take the back seat and just observe and learn.  I agree that a good story will catch anyone’s attention.  As Vachon mentions Milk has done that most recently.  Recently, Isaw Boys Don’t Cry (not realizing it was a Killer Films product) and absolutely loved it.  Hilary Swank did a undeniably brilliant portrayal of Brandon. I was drawn to a good film and thus opened my mind to ponder about what it must have been like for the real life Brandon Teena.  Vachon shares with Moore that Boys Don’t Cry was the only film where she got the Hollywood nod.  In contrast, Vachon was told that Safe didn’t address the gay crisis enough, Swoon had too many negative images, and Go Fish was ageist.

Based on Julianne Moore and Christine Vachon‘s discussion, I thought I’d pose some of the same questions to you.

I thought it was so touching that Moore’s children asked if they want to be married to a mommy or a daddy when playing the boardgame Life.  How do you feel about teaching that philosophy to your own children?

Can an independent film with LGBT representation and a great storyline attract big name celebrities to the cast, or is it all about money?

Do you think Go Fish would have the success today as it did when it was first released?

Do you think that the queer cinema subculture within film is as relevant and necessary today as it was when it became popular in the early 90s?

March’s episode of In The Life closes out with a tribute to the film Desert Hearts and its positive portrayal of lesbian relationships on screen.  It’s based on the book Desert of the Heart by Jane Rule.  Director Donna Deitch and film lead Patricia Charboneau reunite to reflect on the impact of this 1985 film classic.

Here’s a brief synopsis of the film.

‘Desert Hearts‘ is set in 1959. Vivian Bell (Shaver), an English professor at Columbia University, travels to Nevada to establish 6-week residency to obtain a divorce. She stays at a guest house for women waiting for their divorces to be finalized, owned by Frances Parker (Lindley). (source: wikepedia)

Although Vivian left her husband because she had “drowned in still waters,” she is not quite prepared for the tidal wave-effect Cay has on her life. As Vivian herself admits, her life is all about “order,” and her image of herself as a scholar and a professional, upstanding woman does not include a relationship with a woman. Cay, meanwhile, is living at home with her stepmother, Frances (Audra Lindley) while she waits to meet someone who “counts”–and she almost immediately recognizes that Vivian is that someone.

Both women struggle with conflicting desires and a sense of obligation to others, and are ultimately drawn together not just because of their attraction to each other, but because each woman offers the other something she has been unable to find on her own. (source: After Ellen)

For fans of Desert Hearts, Deitch shares that she is currently writing a sequel.

If you’ve seen Desert Hearts, what do you think is the most significant contribution the film made at the time?  In the context of Womens History Month?

If you haven’t seen the film, does reading the synopsis motivate you to rent it?  If yes, what about the story sparks your interest?