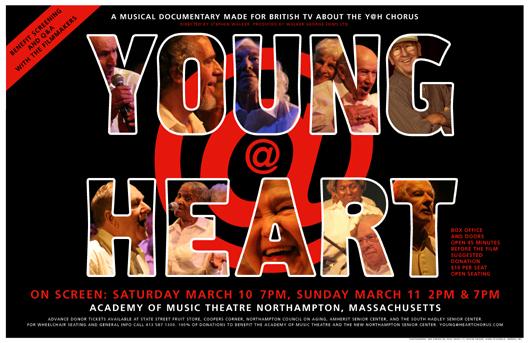 I am a documentary buff (that’s a “duh!” to some of you).  It probably comes with the love for listening to and telling stories of others.  Honestly, I can’t remember exactly where I read about this film, but it was in a list of indy flicks that hadn’t won at Sundance 2008 but were still worthy of checking out (I think I read it in the NY Times).  Let me tell you, this is going up there in my all time favs list.  I am almost mad as if someone were hiding this film from me, so I feel obligated to bring it to your attention.  Whether or not you enjoy documentaries, this film is worth watching and guaranteed to warm your heart. If you’re a sensitive one like me, you might need a few tissues because you’re sure to fall in love with the stories of the choir members featured and affected by how much they literally live to rehearse, travel, and perform with Young @ Heart. 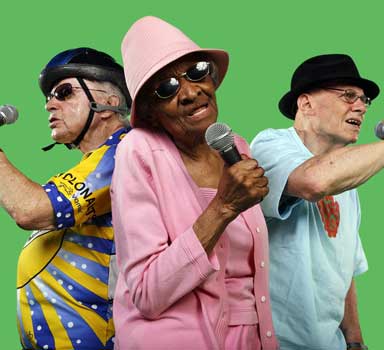 So what’s it about??

Young at Heart: Director’s statement (an excerpt from Britain’s Channel 4)

“When my wife and producing partner, Sally George, first mentioned something about an American rock chorus of old age pensioners called Young@Heart, my immediate reaction was to run. A few days later, in October 2005, I was dragged kicking and screaming to the Lyric Theatre in Hammersmith where the chorus were on tour with their show ‘Road to Nowhere’. Then something extraordinary happened.

Eileen Hall, a British-born 93 year-old ex-GI bride, stepped up to the microphone and yelled out the opening lyrics to ‘Should I Stay Or Should I Go?’ by The Clash. The audience – mostly in their twenties and thirties – gasped in astonishment as she belted out the song at full throttle, backed by the chorus.

The words took on a whole new meaning. She was singing, not about relationships, but about life and death. I was hooked. Here was a film I just knew I had to make.

I’d always wanted to make a film about old age and here was a wonderfully unusual way to do it. We decided to make the film a mix of actuality documentary and highly stylised music promos – songs like ‘I Wanna Be Sedated’ by The Ramones which we set in a nursing home (it has to be seen to be believed!).

By March 2006 we found ourselves in Northampton, Massachusetts filming Young at Heart rehearsing a series of new songs for an upcoming show…

Young @ Heart choir performing at a Massachusetts prison, particularly the song Forever Young.  Performing for prisoners as a non-prisoner could be nerve wracking in itself, but something about these “young” men and women really connected with the prisoners and the staff.  The footage shows the audience fully engaged, and you can tell that some were probably recalling vivid memories of time with their elders.  It’s amazing the ability they have to break down barriers without effort.

I also love the music videos that are injected throughout the documentary.  Campy like the American Idol ones, but it works for Young @ Heart‘s songs.  They cracked me up!  Dressed up in suits with young, scantilly clad ladies by their sides and such. 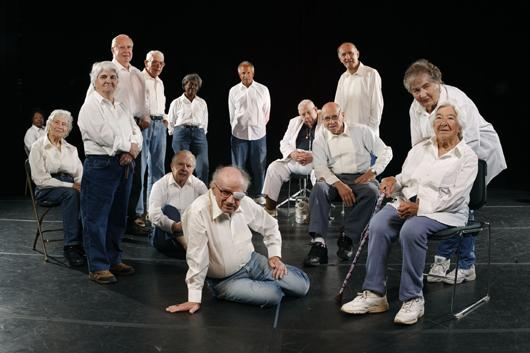 It’s about life, cheating death, and living every moment to the fullest.  We only get one shot at this life so make it count.

Bob Cilman, the choir director, is an angel for working so tirelessly for over 25 years with this chorus of 70-somethings on up to 100-somethings.  What a way to spend your time enriching the lives of others.  I admire what he’s doing and am inspired.

I was so touched by this documentary that I’ve already reached out to the group in hopes of landing an interview with director Bob Cilman.  Of course, I’d love to see them perform, too, but they’re on hiatus until sometime later this year (July 2009).  Each one an amazing story, and it’s clear that singing with Young @ Heart gives them a reason for living on.  Shoo!  It gave me a reason for living on.

Keep your good karma/prayers/whatever happy vibes out there that I hear back from Bob Cilman.

For 1 hour and 48 minutes, I had a few dozen grandparents and close friends today.  Considering that all of my grandparents have passed on, it conjured up some very pleasant memories for me and a few tears.

Interview with choir director Bob Cilman about how he got involved with Young @ Heart Chorus and getting involved with the documentary.

Dude!  This is what I wanna be when I grow up!

I feel like even giving you the link to their page might ruin it a bit, but if you insist on reading more about Young @ Heart, that’s a good place to start.

How do you see yourself living in your final years?