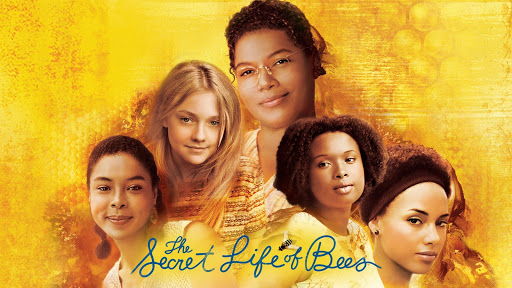 Ok, I’ve never tried to write a movie plot summary, but I’m going to give this one a try.  I’m not spending a terribly long amount of time on getting it write so don’t shoot the blogger  😉  I link to lots of interesting things at the end.

Ladies, get out your tissue boxes and be prepared for one of those flicks that conjures that cathartic cry as you watch the lives of all of the characters unfold and the beautiful bond that forms between them in 1964 during a racially divided time in our country’s history.  Regardless of the issues of race, you cannot help but to fall in love with Lilly’s (Dakota Fanning) brave journey to connect the missing pieces about her deceased mother.  Lilly rescues Rosaleen (Jennifer Hudson), her care giver and worker on her father’s peach farm, from the hospital where she was recovering from being beaten on Lilly’s 14th birthday when 3 white men suspect Rosaleen is off to a secret meeting in town where Blacks were registering to vote.  Rosaleen had convinced T. Ray (Paul Bettany), Lilly’s abusive father, to have Lilly accompany her for a trip into town for a training bra in town.  Spearheaded by the wisdom and naivety of a 14 year old, the 2 of them embark on a enlightening journey to Tiburon, South Carolina where they are taken in by ladies that Lilly calls the “calendar sisters” May (Sophie Okonedo), June (Alicia Keyes), and August (Queen Latifiah).  You have to watch the movie to see why their names skip a month.  The ladies own a bee farm that Lilly suspects has some connection to her mother based a few keepsakes she reatined over the years.  Love, loss, bigotry, and betrayal all play a part in bringing this forged family together.

I was impressed to see Will Smith and his wife Jada Pinkett Smith listed in the producer credits.  They have been behind many successful films like “The Pursuit of Happyness” and the tv series “All of Us.”

Dakota Fanning has grown up but still has a knack for those sweet All American Girl type roles.

Here’s an excerpt from wikipedia…

Adapted by Gina Prince-Bythewood from the best-selling novel by Sue Monk Kidd, “The Secret Life of Bees” unfolds in a sentimental, honey-glazed land that vaguely resembles South Carolina in 1964. It would be wrong to say that the troubles of that time and place have been wished away on farmer dad, T. Ray (Paul Bettany). He tells her that her mother never loved her and makes her kneel on grits when she misbehaves.

One night Lily, who dreams of being a writer and keeps a box of keepsakes buried in the orchard behind her house, runs away with Rosaleen (Jennifer Hudson), a black employee of T. Ray’s who has been beaten and jailed for trying to register to vote. The two of them find their way to an upcountry town called Tiburon, where they are taken in by three beekeeping sisters named August (Queen Latifah), June (Alicia Keys) and May (Sophie Okonedo).

May, who seems a little simple-minded, is also so deeply empathetic that her sisters have built a “wailing wall,” where she can go to cry when the world’s grief overwhelms her, which is often. June, who plays the cello, is also a political activist (or at least a collector of N.A.A.C.P. T-shirts), and, as such, is a bit leery of the white girl who comes around in need of mothering. But August is a person of such boundless maternal wisdom and generosity that neither June nor Lily nor any of the million bees in August’s care need worry.

Even as terrible things insist on happening, and the bigotry and suspicion of the era take their toll, worries are no match for matriarchal folk religion and the wisdom of the beehive. In its fuzzy linking of female power with insect life, “The Secret Life of Bees” shows a curious kinship with Neil LaBute’s ill-starred remake of “The Wicker Man,” but with nurturing African-American women in place of murderous white ones.

This is one of the best movies I’ve seen in a long time and was seemed so timely for me which made it even more meaningful.

Have you seen the movie?  If so, what did you think?

If you read the book, how did it compare?