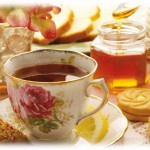 Anyone who knows me in my day to day life knows that I lovez me some tea with honey.  I began using it instead of sugar under the advising of a personal trainer I had years ago, and it has stuck with me ever since.  I am even known to walk around with a small jar in my purse sometimes knowing that I might land somewhere that doesn't have honey (even will carry some tea bags).  … END_OF_DOCUMENT_TOKEN_TO_BE_REPLACED

I'm channel surfing as I settle in for a lonely, quiet night.  Lo and behold, I stumbled upon this Fashion Rocks concert.  What an unexpected musical bonus for the night! Apparently, this is the 5th year, but it's the first time I've ever seen or heard of it.  It was a way to kick off fashion week in NYC. Pause, for my personal plug... Whoever gives a damn and can make it … END_OF_DOCUMENT_TOKEN_TO_BE_REPLACED

I'm glad that they finally moved Ellen to 3pm so it was not competing with Oprah at 4pm (at least as far as I'm concerned).  I'm a fan of both for very different reasons, and yesterday, I had the chance to catch their season kickoff shows.  I must say having Michelle Obama on Ellen held my attention way more than Oprah's host of Olympic medalists. If you watched either or … END_OF_DOCUMENT_TOKEN_TO_BE_REPLACED