You are here: Home / ifelicious music / Rock The Cradle, Lil B. Sure: The apple doesn’t fall far from the tree 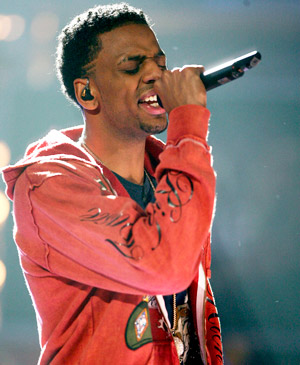 (Press Release) — Lil B. Sure! Son of the sexy singer Al B. Sure! Is proving to the world he can step outside of his father’s shadow. Born on October 30, 1986 (makes him a Scorpio) in New York and now currently resides in Los Angeles, California. For those who know Lil B. know that he is a very respectful guy, with manners and morals. He is the type of guy that will open the door for you, help an old lady across the street and takes care of the people around him. If you don’t know him, if you had the chance to be around him you would immediately see his great sense of humor, his sleek personality and his general humbleness. If you are ever on a basketball court, bring the cameras, because Lil B. Sure! is always on point with his ball handling skill and just may dunk on you!

Lil B. has been in love with music since he was a child. He was born during the time his father’s hit song “Night and Day” was circulating the world on all of the top 10 charts (in fact “Night and Day” stayed at the #1 spot for 8 weeks in a row). Al B. Sure! Said Lil B. would sing all of his songs as a tiny kid, even though he would make up his own words, he was still impressed with Lil B’s ability to keep the melody. Lil B. is currently one of the contestants on MTV’s “Rock The Cradle,” an “American Idol” for celebrity kids. Lil B. will tell you that music is his top passion and love, right after his love for his mother and his family.

To find out more info on Lil B. Sure! you can visit his myspace page at www.myspace.com/Lilbsuremusic.

Be sure to tune in to “Rock The Cradle” on MTV Thursdays at 10pm EST/PST to watch and VOTE for Lil B. Sure!

Video of Lil B. Sure covering Maxwell’s “This Woman’s Work” on “Rock the Cradle”

Lil B Sure “Rock the Cradle”
Uploaded by TheDlisted. – Watch feature films and entire TV shows.

About Lil B. Sure!

Albert J. Brown IV was born on October 30, 1986, in money earnin’ Mount Vernon, NY, as his father, R&B singer Al B. Sure!, hit the prime of his career. In high school, he was dubbed Lil B. Sure! because he got the ladies’ attention by singing like his father. Even his homeboys gave mad props to his vocal skills! When singing in the hallways and during basketball practice wasn’t enough, Lil B. Sure! entered the high school talent show. The next thing he knew, it was on the wire that he had real skills, and the girls at school really started going crazy for him. Even parents, teachers and the principal were amazed by his vocal prowess. Lil B. Sure!’s got talent, and now he’s ready to Rock the Cradle and prove the apple doesn’t fall far from the tree.